Did you know that if you’ve got a set of shodō Japanese calligraphy utensils, you can do more than write poetry? That’s right, there is another whole world of art made with sumi Indian ink and washi Japanese paper. This is the traditional practice of suiboku-e ink wash painting. In order to help you better understand the beauty of these works, I want to first share with you my thoughts and critiques of them, before contrasting these with the reviews and explanations of experts in the fields of art theory and criticism.

As more a ‘written word’ kind of guy, I will admit that I have always considered myself as firmly in the calligraphy-camp. But, in preparing for this article, I can say that I have come to appreciate the other uses of sumi Indian ink in Japanese art. In other words, I have grown to appreciate the suiboku-e paintings. What’s more, I think that you will too. 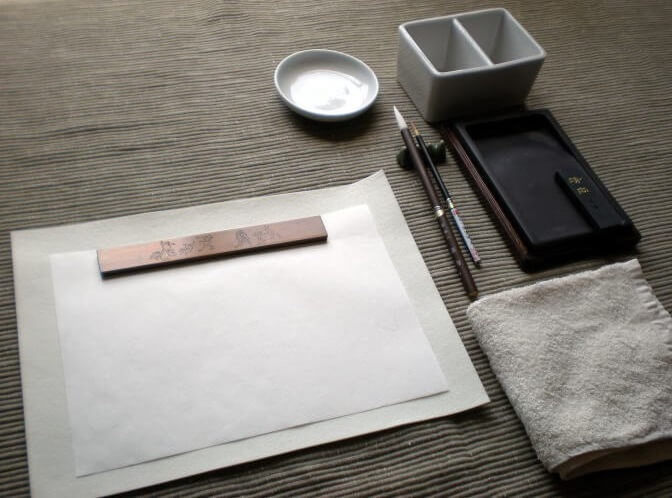 Before diving in, we will take a short look at the history of this art form. Then we get straight to my ‘blind reviews’ of the best of the best. Finally, I’ll provide you with the words of some real experts to explain how the work is commonly remembered and appreciated. Hopefully my readings won’t be so off the mark to as be completely embarrassing. Fingers crossed! (Image above: suibokugaya.ocnk.net)

A Japanese Art with Continental Origins:

Like many of Japan’s most time-honoured, traditional art forms, ink wash paint was introduced to the islands via China and Korea during the 8th century when ink was being produced with local ingredients for the first time. From calligraphy, its use spread to drawing scenery, and the art of ink wash painting took off in Japan. Much like calligraphy, the aim here is not the direct and mechanical recreation of a scene, but instead to interpret and present the artist’s creative rendition of it. Meaning is thus communicated indirectly, and much is left up to audiences to decipher and make sense of by themselves.

The finished work can take the form of a hanging scroll or folding screen – or a simple page of washi paper mounted by some of Japan’s expert framers. Landscape paintings like the suiboku-e ink wash paintings have been popular for over 500 years, and the influence of the genre is visible on the later ukiyo-e woodblock prints of the 19th century which also commonly depicted landscapes. 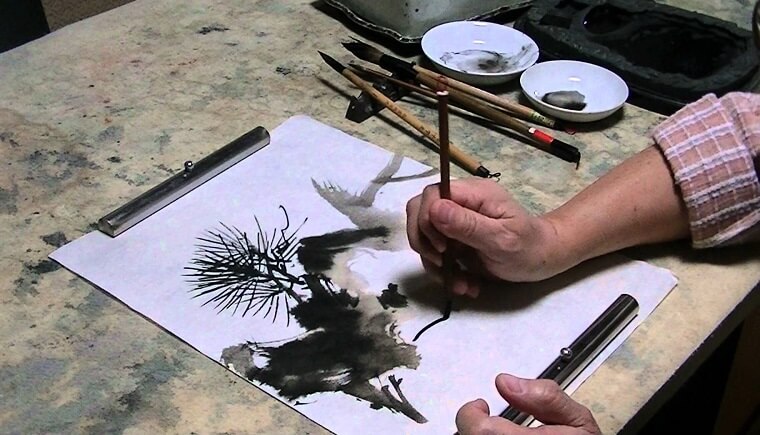 Finally, and like many other forms of Japanese art – ikebana flower arranging, shodō calligraphy, and Japanese lacquerware, to name a few – these paintings might described as minimalist for their expression via absences. It’s as much about what isn’t there as it is about what is. I am reminded of mono no aware  and wabi-sabi, two mantras of Japanese artistic aesthetic that even my relatively untrained eye is able to catch in the many forms of Japanese art I come in contact with here at OrientalSouls.

Though not an expert, I thought I would share with you my take on a few of the most well-known and valuable suiboku-e ink wash paintings in Japan – if only to show you that anyone, regardless of education or experience, can enjoy these timeless works of art. With the history and background lesson of the previous section as my toolkit, I will begin my critique! 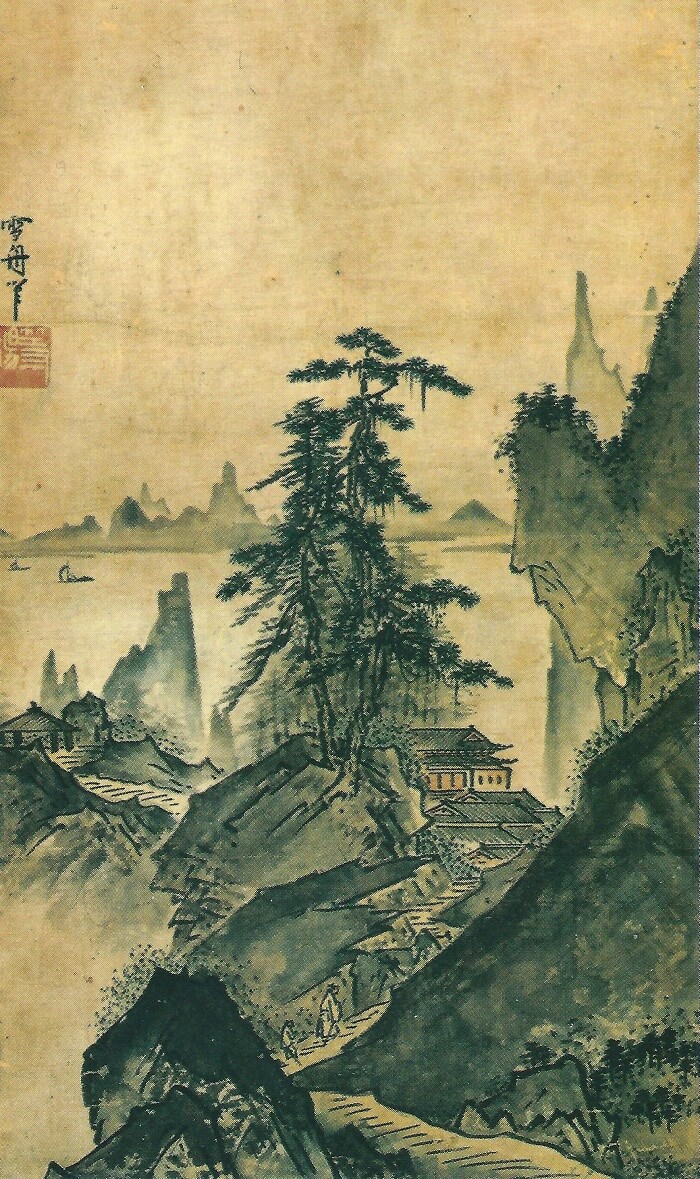 This is a hanging scroll called Landscape by Sesshū from around the year 1500. What we have here is a detail, as the original has several lines of script towards the top. The space between the script and landscape is blank, perhaps representing the sheer size and vastness of the sky above. The position of the ground below, a sort of seaside cliffy area, takes up less than an 8th of the entire scroll, speaking to the interesting creating of empty space, balance, and proportion so common in early-modern Japanese art. This painting is a certified, designated National Treasure.

The sea seems foggy, which brings the shoreline into clear view in the audience’s eyes. I like this technique as the background is not distracting. We are greeted by some figures walking toward to a house or temple-like structure, perhaps on their way to pray or back from a trip. It seems like the sea-side life might be difficult, as there is a sense of fatigue visible in this work. Was this sort of land high-value real estate in the year 1500? I can certainly imagine it the spot of a mansion today. Still, without an ultramodern house and electricity, I get a sense of loneliness as well as danger from what I can imagine are crashing waves beneath.

The colours are, of course, rather uniform; only sumi Indian ink at work here. This again keeps the eye from being overloaded or distracted, something I like and have noticed in various other forms of Japanese art. I can’t tell if these people are coming or going though, and it gives me a sense of unease. Perhaps the experts have figured out the meaning behind this one? Let’s find out what they have to say, and if they too appreciate the ‘invisible’ background.

This painting is known as having sharp, careful lines, producing great detail. This is a feature of the work and something that sets it apart from other suiboku-e ink wash paintings (OK, they got me right off the bat! I didn’t know that that was a notable feature – oops!). The background horizon is also uncharacteristic for the genre (got me again!), while the perspective and winding path combine to provide a sense of depth.

The grouping of painted aspects – the rocks, trees, and mountains – at the bottom contrasts drastically with the empty sea and sky, giving the painting impressive, impactful power (Yay! Something I noticed!). Colour is used sparingly, only greens on the trees and some yellow on the building. About the figures walking toward the building: these are apparently common characters in Sesshū’s paintings – an old wanderer and his young helper. (So I was partly right: they are ‘either coming or going’ !! They are wandering!)

There we have it, my blind review and the trained words of the expert. While my technical readings were probably a bit off, I was able to pick up on the imagery and scene set by the artist. All this perhaps says more about the skill of the artist himself … He was able to communicate his cliff-side scene to an untrained amateur in the year 2018! Pretty impressive if I say so myself.

Stay tuned next time as I continue with part two of this series of ‘blind reviews.’