Looking for a Japanese-themed gift? Working on a meaningful art or design project and want to borrow from Japanese visual aesthetic? Perhaps you visited Japan and were impressed by the carefully selected colour palettes used to decorate street signs, trains, and both modern and traditional fashion. From formal greeting cards to anime and manga-inspired street fashion, colour is one of the most important aspects of the Japanese visual aesthetic. But how did a single colour palette come to represent the identity of a nation? 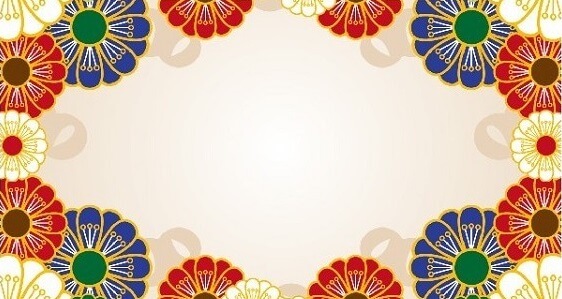 In today’s post I’m going to give a rundown of Japan’s favourite and most historically popular colours, investigating their meaning while showing some examples of how their usage has changed over time. By taking this crash-course of Japanese colour, you will be able to impress your friends with thoughtful insights into the history and meaning of each colour, enriching your travels and giving you an edge when searching for that perfect ‘Made in Japan’ gift or memento. 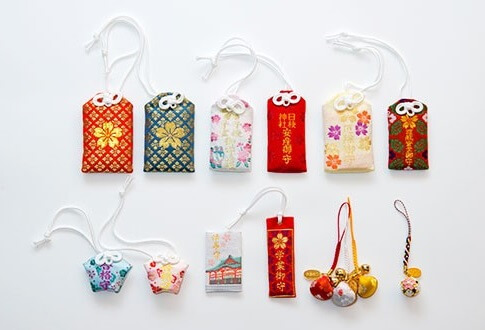 Built upon a base of strictly defined ‘traditional colours,’ the Japanese palette has grown and evolved over centuries. Their influences are wrapped up in appreciation for the changing seasons as well as expressions of virtues of the soul. Starting with the basics, let’s get you up to speed on the most colourful aspect of Japanese history. (Images above: notesmarche.jp, www.hie.jp)

The Ancient Roots of Japanese Colour: Meaning, Rules, and Legacy

The fundamentals of the Japanese colour palette come from ancient traditions of social rank and hierarchy. Japan has an Imperial family system historically verified into the 6th century. In order to distinguish the position and authority of royalty, those amongst their court, and the many levels of society beyond the castle walls, a strict hierarchy of colour was decided upon for use in public dress.

The “Twelve Level Cap and Rank System” adopted in 603 defined rank based on the five Chinese elements passed onto Japan through the spread of Buddhism and language from the Asian continent. Based on wood, fire, earth, metal, and water, the ‘Cap and Rank System’ involved coloured caps, worn by ranked officials of the government and imperial court. Through this system important meaning was ingrained into each of the colours adopted in the system. For example, deep purple, the colour allowed only to the highest ranked officials, became attributed to unmatched virtue for its affiliation with elite nobility. Moving down the list, the virtue and ‘rank’ of each colour became increasingly linked to the job and responsibilities of those donning the cap.

What’s more, the unauthorized usage of these colours by people without the appropriate titles or ranks was banned throughout the empire, entrenching the meaning and importance of each colour by ensuring everyone understood who could and could not wear them. With harsh punishments awaiting anyone who mistakenly wore a colour saved for those ranked above them, the hues and meanings of each were carefully taught and remembered.

Creative Expression and the Four Seasons: A Widening of the Japanese Colour Spectrum

The explosion of visual and literary creativity during the Heian Period (794-1185) pushed the Japanese colour palette in new directions, meanwhile providing all the necessary meanings and definitions needed to make sure it stuck in the minds of the people. As the Japanese language evolved, so too did its ability to describe colour. In the various legendary works of Japanese literature produced during this period, new descriptions of scenery and art became canon, setting the precedent for later references to the colour of falling leaves or spring flowers. 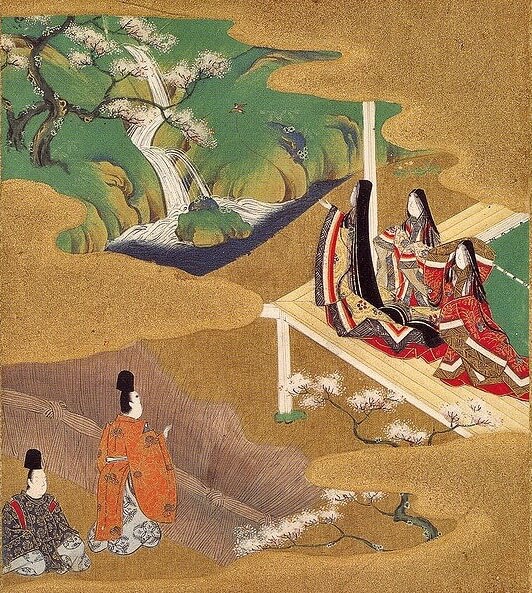 The natural environment of Japan also defined which colours could be made and recreated – through dyes – by the people of Japan. Thus, the oldest aspects of the Japanese colour palette are directly connected with both rank and hierarchy, as well as the materials at hand in the cities and villages of ancient Japan.

Picture the Japanese landscape – even a ball-park image will do. Think of the movies, anime episodes, or posters you’ve seen. These professional designed snapshots of life in Japan likely paid close attention to the colours and scenery we are talking about today, so they will work great.

Now, imagine spring. Flowers blooming, the small, light green leaves of the blossoming cherry and plum trees filling in the gaps between the beautiful white, pink, and purple flower petals. Marigolds and willows popping up in between balance out this Japanese spring palette. 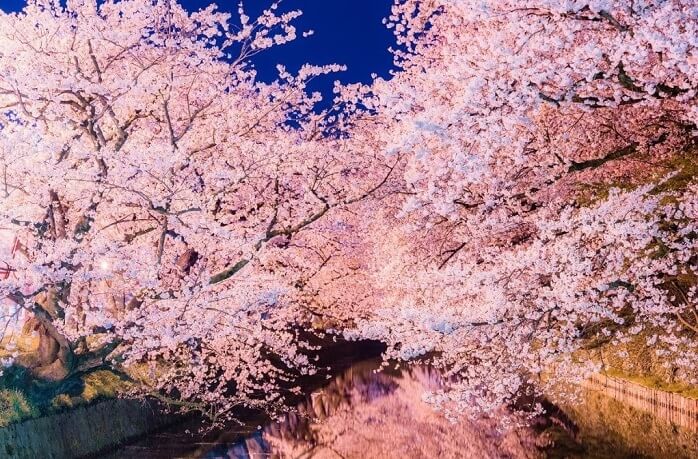 Summer in Japan is usually clear and hot – the rain seasons are over and the sun has come out. Green upon green as bamboo groves mix with the evergreens and deciduous trees now clean of flowers and covered in leaves. Add to this a wild spread of shrubbery and you’ve got the Japanese summer landscape. Amongst all these plants hide the millions of cicada humming away, creating the perfect Japanese summer scene. 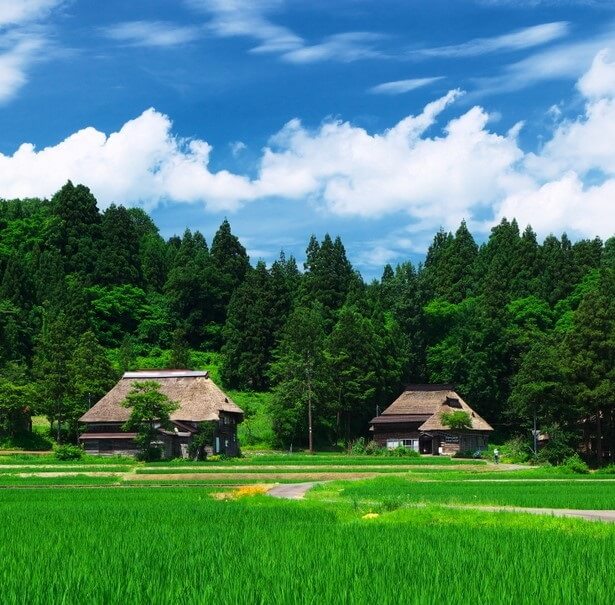 Autumn is often considered the most beautiful season in Japan. Reds of all shades cover the hills and valleys throughout the country. What’s more, the country’s rice is harvested, filling the bowls of citizens (and the wallets of farmers). Harvest season brings with it certain religious celebrations, as well as the traditional browns and reds that result from the end of Japan’s blazing hot summers. You won’t want to miss the momiji red leaves (like miniature maple leaves) that have made cities like Kyoto and Hiroshima hugely popular tourist attractions during the autumn months. 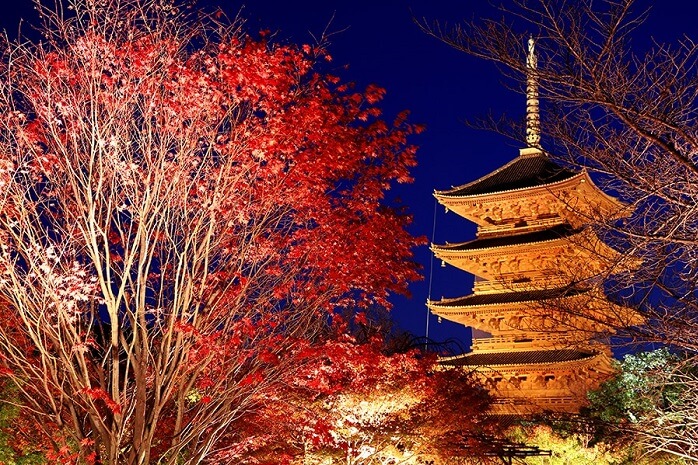 Finally, winter: Ice, pristine snows, and the frozen crunchy browns of fallen leaves and shrubbery. The clear fields reveal the earth beneath, hidden during the year by the farmer’s crops. Snow frames the country’s most famous architectural wonders, increasing their already breathtaking beauty. 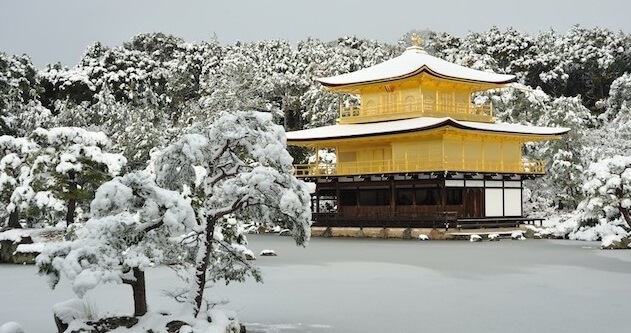 It’s from these inspirations that Japanese artisans worked, manipulating their natural ingredients in attempts to recreate the colours of the world around them. Add to this the various meanings passed down through the ages long before them and you have the two most important aspects guiding the development of Japan’s colourful aesthetic. Let’s look at those historic ‘meanings’ next.

The Meaning in Japanese Colours 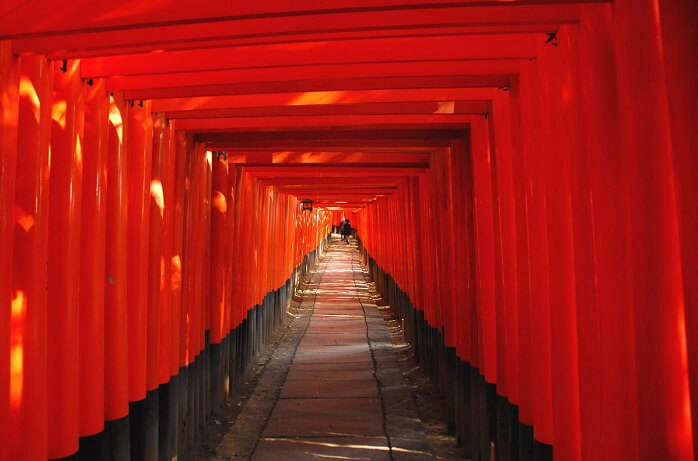 Unlike in many of other cultures, black is not necessarily an ominous colour with negative meaning. A colour that was known to offer protection of body and spirit, black appears often in the outerwear worn in formal settings. The family crest is only ever applied to this outer layer of kimono formalwear, adding importance to the colour from which these coats are made. 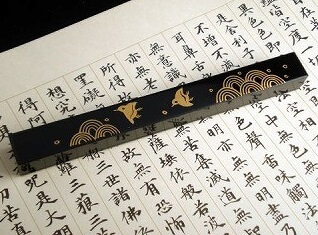 White is a rather tricky colour – it may contain many religious connotations, depending on the context of its use. The reasons for this is the colour’s traditional use in shinto religious ceremonies involving certified priests dressed in white, and the white ropes and tools used to ward off bad spirits. 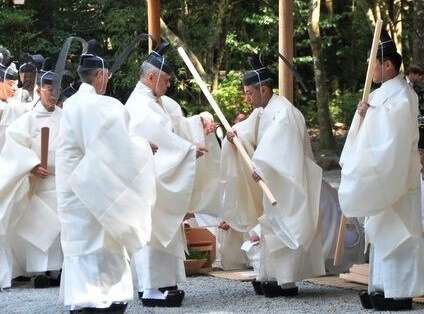 Blue is another of the oldest foundational colours of the growing Japanese palette. One of the earliest forms of dying in which Japanese craftspeople were truly global innovators was the indigo craft. Still a booming industry today, the indigo dying practise allowed Japanese art to reflect the deepest, most impresses hues of natural blue early on. Building upon the reputation of blue as a good-luck colour, these indigo dyers made sure that the deep blues became closely linked with the Japanese canonical palette. As a way to communicate depth of feelings in visual art, this range of blue was a hit with the woodblock print artists of the 19th century.

Today, the logo of Japan’s national sports teams – the Samurai Japan teams in baseball, soccer, etc – are based on these deep indigo blues. 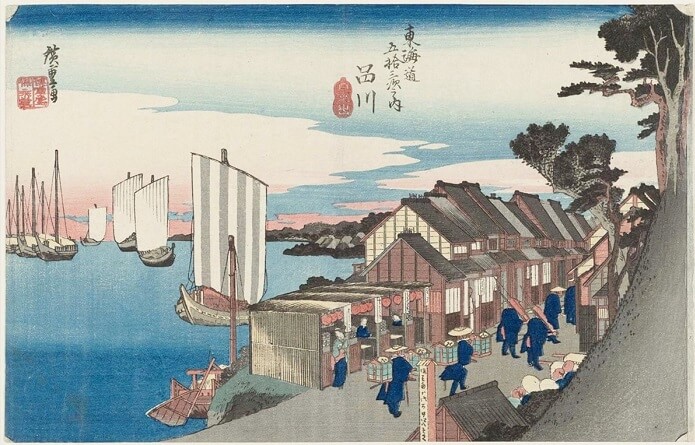 Japanese Colours: A Mix of Traditional Meaning and the Natural World

So, now that we know about the historical roots of the basic colours used in Japanese art and traditions, we can begin to make sense of that gift your cousin gave you after his trip to Tokyo! But seriously, you should consider the artist’s choice here – without a doubt they were inspired by each of the themes covered today. Moreover, with a growing literature of colour guides and dictionaries being translated into english, we are able to do our own research into the historic meaning of that blueish-purpley shade you found along the edge of your grandmother’s kimono. With historic meaning engrained in every aspect of traditional Japanese art, the opportunities are endless. Happy hunting! 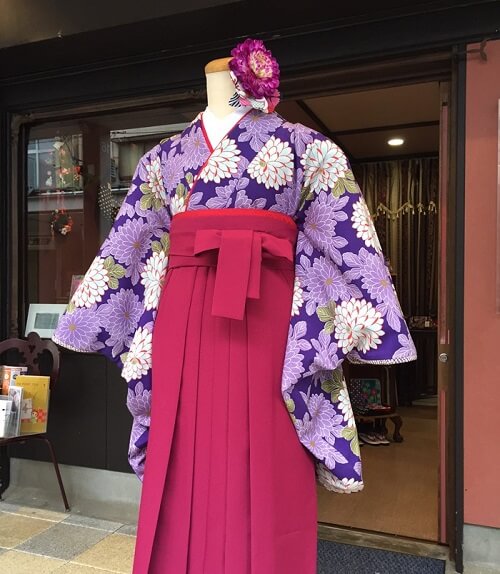