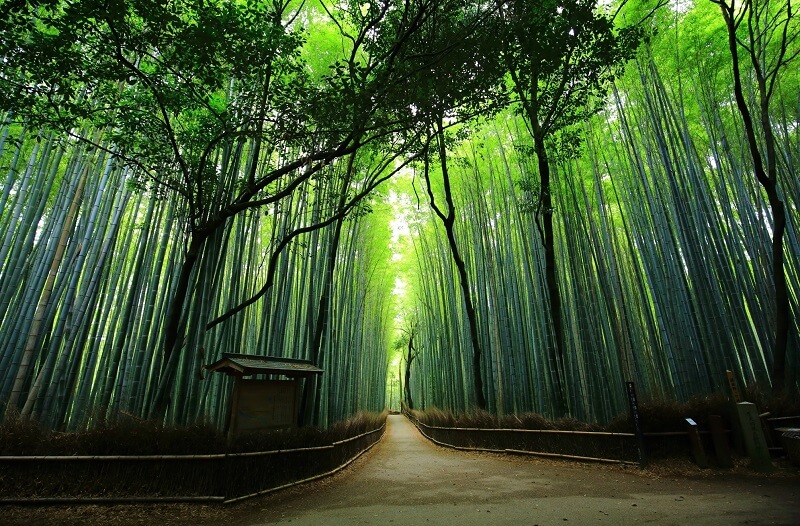 Images of the tall, slender bamboo (take – pronounced tah-kay) tree have become almost synonymous with descriptions of the Japanese landscape. This is in part thanks bamboo’s constant appearance in Japanese art since even before ukiyo-e woodblock prints broke onto the international scene in the mid 1800s. But why did so many Japanese artists decorate scrolls and folding screens with scenes of bamboo forests and sprouts? The answer stems from the fact that the artists themselves were surrounded by the stuff. That’s right, in Japan bamboo is everywhere – and it’s been that way for centuries. It grows in such abundance that it’s sometimes seen as a sort of renewable resource. Chop and cut and gather as much as you might, the bamboo will soon be back sprouting again in full force. In the right conditions, a new, healthy shoot can grow up to 4-inches in an afternoon. Meanwhile, a matured shoot can skyrocket several feet in a single day! 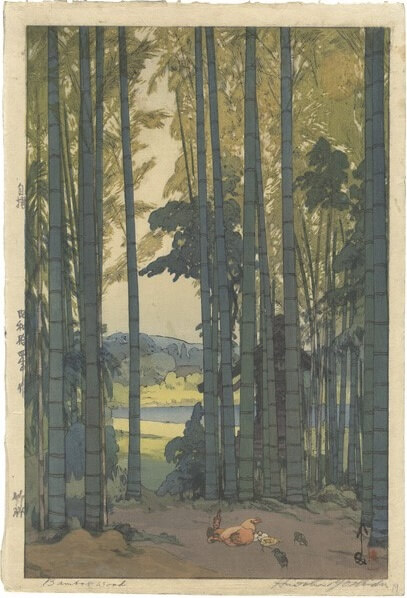 With an abundance of the fast growing bamboo spread throughout the foothills and mountainsides of Japan, artisans and craftspeople there have developed innumerable ways to put it to work. Today, we are going to take a closer look at the centuries-old relationship between the people of Japan their skinny green friend, meanwhile pointing out some of the trends and innovations that have sprouted along the way. So join me in our two-part journey taking us through the lush green bamboo groves of Kyoto to the workshops processing this durable wood for uses throughout the country and around the world. (Images above: kyotomoyou.jp, yamada-shoten.com)

The Historic Roots of Japan’s Abundant Bamboo
Japanese Bamboo Today: An Unlimited Supply?
Making Peace with the Mighty Bamboo: A Call to Arms? 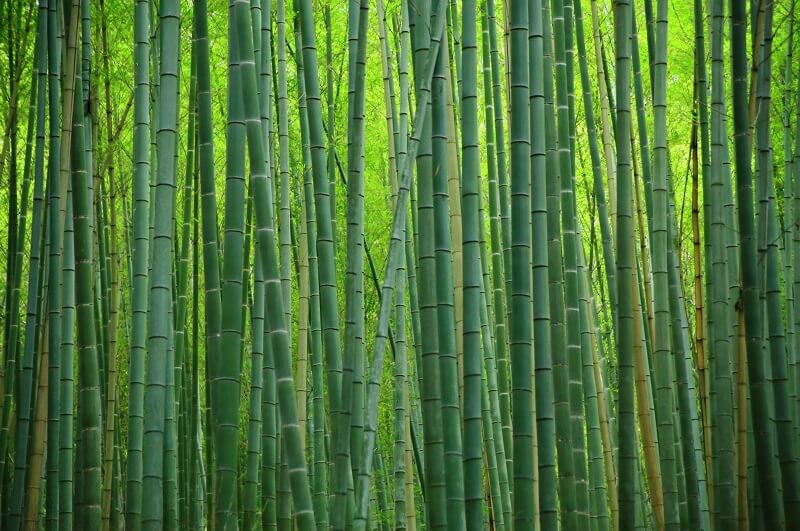 Mousou, or Giant Bamboo, is perhaps the most common bamboo found in Japan. Cultivated for its multiple uses (which we will learn more about later), this specie is said to have arrived in western Japan from the Asian continent around the year 801 AD. Thereafter, experts attribute its nationwide spread to the travels of Satsuma domain of southern Japan’s trade and connections with the Ryuukyuu kingdom of today’s Okinawa, as well as with the wider Asian continent. As Japan’s population remained largely rural and agriculturally-focused until the rapid industrialization urbanization in the 20th century, groves upon groves of this bamboo was cultivated throughout the islands for generations. 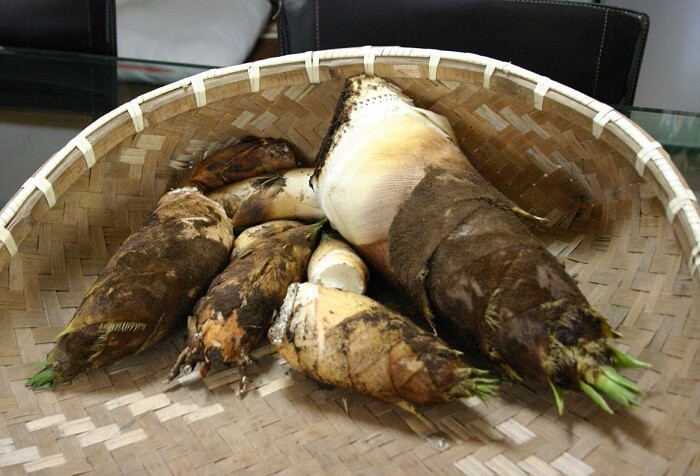 But why grow so much of the giant bamboo? Well, their usefulness starts at their roots: take-no-ko – literally “bamboo’s child” – are the shoots which first appear after an established bamboo tree is cut down at its base. These are used in cooking of all sorts. Meanwhile, the harvested trunks become timber for a myriad of projects ranging from construction to art. For many of Japan’s millions of rural farmers and residents, bamboo was a lifeline not unlike rice or fish.

You’ve probably enjoyed bamboo sprouts (take-no-ko) before as a topping on your favourite ramen. Known as menma, these dried-then-pickled slices are an essential part of an authentic bowl of ramen. They can be seen in the picture below, featured atop a delicious looking bowl of Tokyo-style soy-sauce ramen. After my first taste I was instantly hooked. Nowadays I’m putting sliced bamboo shoots in stir-frys, sautés, and pots of steamed rice. A cheap and healthy way to add to a dish, I have finally caught on to the true meaning of bamboo ‘versatility.’ 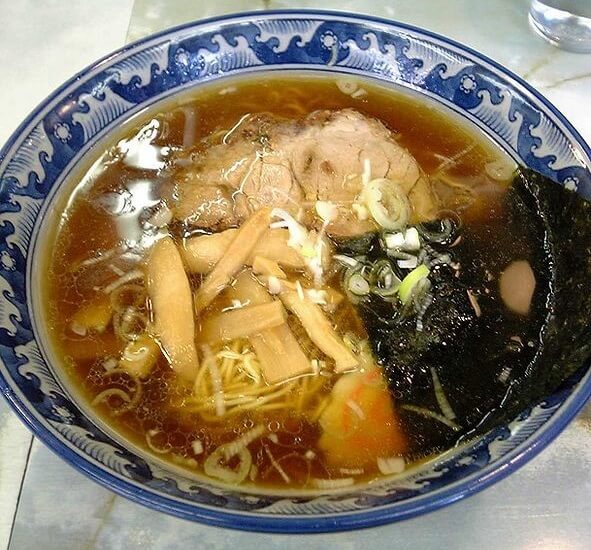 Partly the result of the hard-working farmers who grew it – partly the result of the resilience and rapid spread of its roots and seed, the common specie of giant bamboo spread like wildfire throughout the land. As the Japanese people drifted away from agriculture and began importing and buying their food in the cities, many of former farmlands were abandoned. Left to their own devices, the bamboo shoots took over. 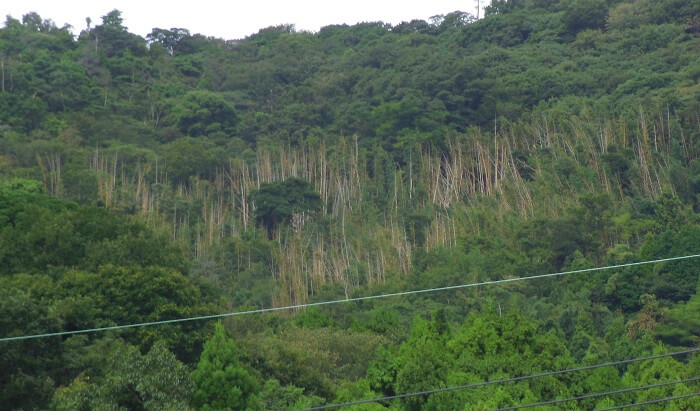 Today, if you travel Japan by land, sea, or air, you are sure to see swaths of green bamboo groves covering mountainsides, foothills, and valleys. So common are the bamboo forests that they have been become an almost iconic image of the Japanese countryside. Scenes of swaying bamboo with sunlight refracting through there gaps create an atmosphere of calming green tranquility. What’s more, their coverage offers a cool reprieve from the humid, hot Japanese summers. Bamboo groves are now featured as some of Japan’s most beloved tourist spots throughout Kyoto – especially the beloved Arashiyama and Kodaiji Temple on the outskirts of Kyoto. 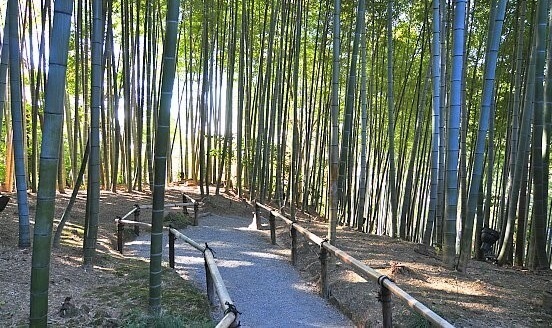 How are the people of Japan managing their fast growing, rapidly spreading stockpiles of giant bamboo? Cut and hack as you will, without professional care bamboo shoots will return with vengeance. In areas where its presence is not appreciated – vegetable gardens, for example – bamboo can pose a real nuisance. That’s why an entire industry has developed around managing and removing bamboo.

Resistant to wind with a flexibility that rarely snaps, bamboo timber has been used in the construction of awnings and small shelters for centuries. Until very recently, bamboo could still be seen at work on construction sites where it was put together to form the scaffolding upon which workers climbed and swayed.

But still, no matter how hard we try to use up Japan’s abundant supply of bamboo, a fresh batch of sprouts pop right back up in their place. Though declaring a bamboo ‘crisis’ is a bit of a stretch, it is not unfair to say that putting the wood to use in as many ways as possible is good not only for Japanese industry but also for the health and diversity of its natural environment. You see, bamboo grows in such thick groves that it often suffocates and pushes out other plants. That’s why a vegetable farmer spends so much of their time battling with these shoots as they pop up around the edges of their fields. 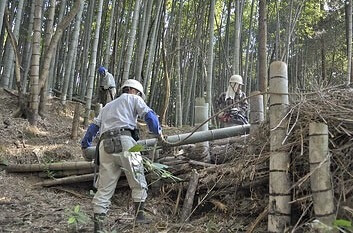 Making Peace with the Mighty Bamboo: A Call to Arms?

So what can we do to help the local Japanese farmer, hobby gardener, or professional landscapers out there fending off the determined spread of Japan’s giant bamboo? Well, for one, we can add take-no-ko and menma bamboo ingredients to our diet! But there is only so much one person can eat, right? There has got to be another way to enjoy the fruits of this seemingly endless supply of durable and lightweight wood!

Well it turns out we (and those who live nearby the ever-sprouting Japanese bamboo) are in luck! There are in fact tons of ways we can adopt this sustainable, natural resource into our daily lives. Not only are we able to benefit from the characteristics of this eco-friendly timber, but we can rest easy knowing we are supporting local, hands-on Japanese industry while helping to stem the ever growing tide of bamboo shoots.

Stay tuned for part 2 of our series on Japan’s most widely used natural resource where we will break down exactly how, where, and why bamboo is put to work by artisans throughout the country. You won’t want to miss the ingenious uses people have come up with!