When I say the word kimono, what comes to you mind? Deep, basic coloured robes or intricately designed and patterned fabrics. In truth, depending on the style, region, or even purpose of the kimono, the designs can drastically differ. While one kimono might be deep, bold blue all-over, the next might be covered in flower pedals and songbirds. 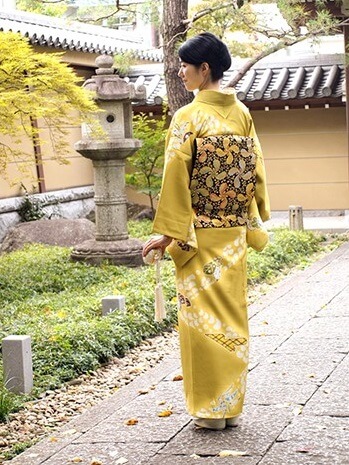 Surely you’ve seen a kimono somewhere. Just a few years ago a kimono-inspired robe was a megahit at stores like American Apparel (R.I.P.) and H&M. I say kimono-inspired because these international clothing giants took quite a few liberties in designing their versions of the Japan’s historic and traditional outerwear. But I digress …

Or, maybe you’ve seen a kimono on TV or in movies. Many westerners were introduced to this traditional Japanese formalwear by the Hollywood blockbuster The Last Samurai – in it, Japanese actress Koyuki wore several kimono. 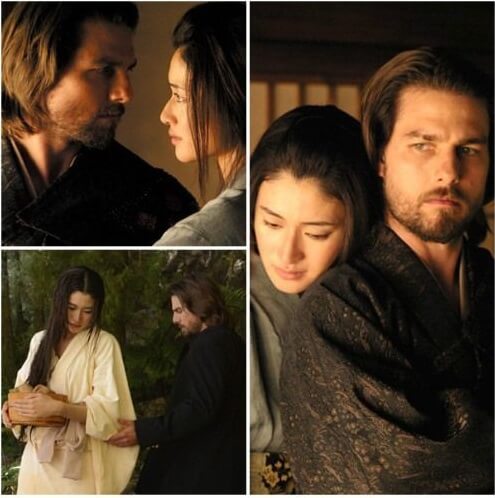 Patterned kimono have been produced and cherished by Japanese families for centuries now. But how do the most elaborate and delicate kimono get their beautiful colours and decorations? Today we are going to take a look at perhaps the most famous and respected method of kimono dying and decorating: the Kyō-yūzen dye. (Images above: kimono-aoki.jp)

The method is said to have been invented by Miyazaki Yūzensai, a painter in Kyoto during the 17th century. He was skilled with a painting brush and known for his painted fans. Miyazaki Yūzensai decided to expand his business and began to search for ways to design kimono, the popular and everyday ware of many people in the capital city of Kyoto.

His customers were of course members of the upper-echelons of Kyoto society. As a result, the designs kept getting fancier – and yūzen fabrics (named after their creator) earned a reputation that quickly became more and more closely connected with wealth and elegance.

At the most basic level, Kyō-yūzen can be described as the Kyoto variant or style of a form of resist dyeing that later spread throughout all of Japan. Resist dyeing is a process in which certain materials – often wax – are applied to a fabric temporarily before dying. This way, the temporarily applied material blocks the dye from entering certain areas of the fabric, allowing the artisan to create patterns and imagery by leaving parts of their cloth undyed.

In this case, starch is painted onto the fabric, delineating the areas which will remain untouched by the dye. This is done carefully by hand and, by adding additional steps to the dying process, can produce multiple colours on a single fabric. This was a HUGE innovation at the time.

Kyō-yūzen Style: One of a Kind

Then the imperial capital of Japan, Kyoto was for centuries a quite, palace town. With the imperial family and their court at the center of town, the city of temples and shrines was the heart of Japanese elite society. With tastes to match, the people there ordered the fanciest kimono in the country. Thus, Kyō-yūzen kimono have a distinct level of flair unmatched by other regional dying trends. 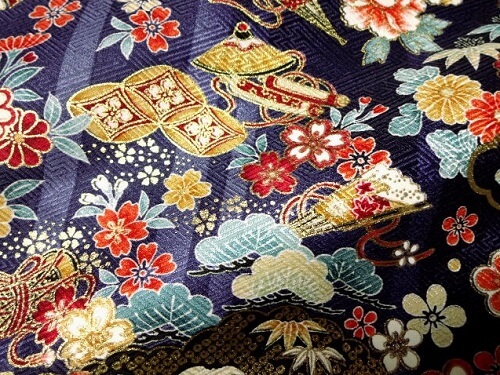 With thick layers of golden and silver leaf embroidery, these patterns often feature bright colours and scenes of lush, natural beauty. It is said more than 20-steps goes into just the application of colours, with a certain artisan with each their own role in the process.

Today, printing wheels are used to apply the resin before dying. These are wheels at work in Kyoto today, where the Kyō-yūzen tradition is alive and well. 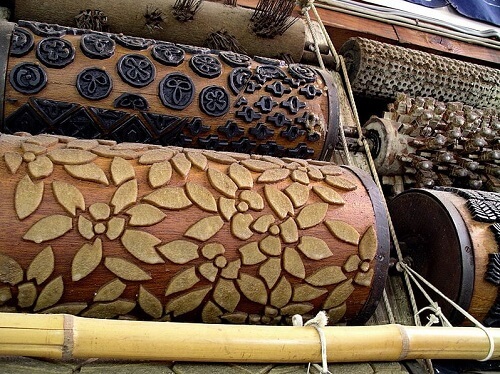 Some legends say that the Kyō-yūzen method was enjoyed so widely because it allowed people to wear intricately decorated kimono that were otherwise illegal. You see, hand-stitched and embroidered kimono – the ones with complex flowers and patterned designs made the only other way anyone knew how – were to be worn only by imperial court and members of the aristocratic class. All others caught wearing this marker of authority, wealthy, and prestige would be severely punished. 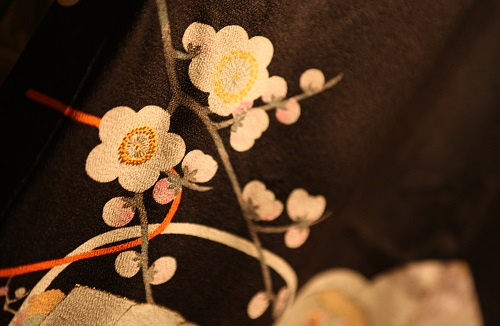 But with the ability to print and dye these patterns, the law banning embroidered designs was skirted. Now anyone (with some spare cash) could have a beautiful and intricately designed kimono. In a way, the kyō-yūzen dyeing method helped to democratize kimono wearing in feudal Japan.

Today, even though there is no law saying we can’t wear embroidered fabrics, people still love the kyō-yūzen died fabrics for their kimono. Found in shops around the country and around the world, kyō-yūzen kimono are easily the most famous and most popular of the high-end, decorated kimono. The fabric itself is now used in making a number of types of goods and wears, which means you don’t have to put on a kimono to enjoy their beauty. Now available are handkerchiefs, tablecloths, and even tumblers and wallets using inlaid kyō-yūzen fabrics.

Keep your eye out of kyō-yūzen next time you are in a high end fabric shop or a kimono store in Japan – I’m sure you will like what you see.