“Sudden Shower over Ōhashi Bridge and Atake” (1857) is perhaps the most widely recognized and revered painting from Utagawa Hiroshige’s masterpiece “One Hundred Famous Views of Edo” series. Besides the innovative use of perspective to highlighting the architectural impressiveness of the Shin-Ōhashi Bridge, what is so special about this one print? Amongst a set of 118 different scenes, why do people always come back to this one depiction of evening rain? Let’s find out what makes these rains so important to a larger history of traditional Japanese art and its global influence. 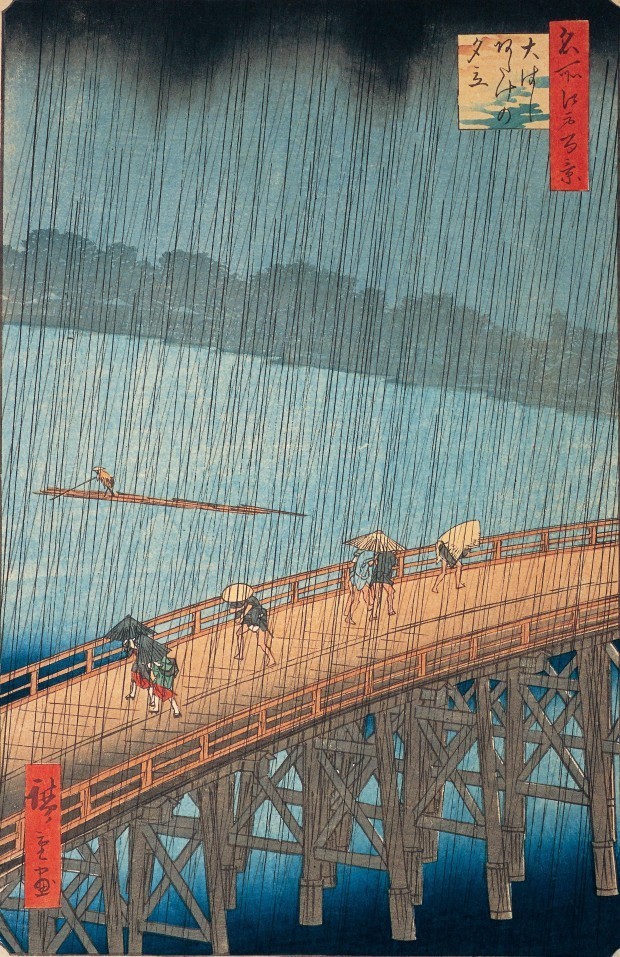 Produced late in Hiroshige’s career, “Sudden Shower over Ōhashi Bridge and Atake” can be understood as the culmination of the Japanese ukiyo-e woodblock print master’s life and experiences. At 60 years old, Hiroshige had already had an illustrious career as Japan’s top woodblock painter. His amassed skills are on display here, as we get a taste of Hiroshige’s comfort in playing with perspective, juxtaposition, colour, and depth.

Capturing in a moment a sudden and torrential downpour over the Sumida River, the scene is one of surprise and even panic. Residents duck for cover as one can be seen attempting to quickly return his boat to shore. Meanwhile, darkness is falling and the residents seem poised to be stranded in both a terrible storm and the pitch black. 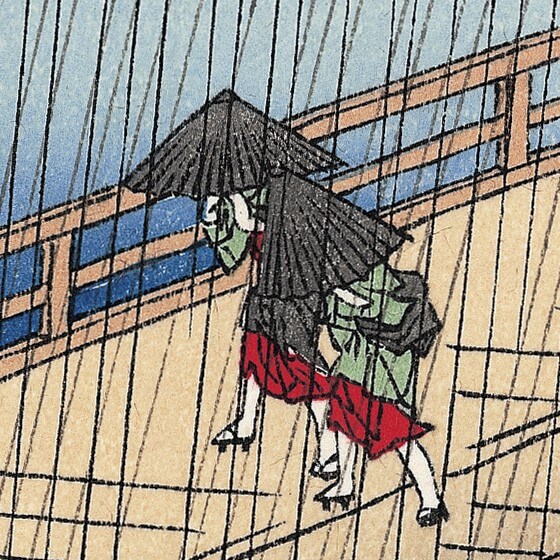 The layout of the Ōhashi Bridge, diagonally across the foreground, contrasts with the far riverbank reaching upstream at a perpendicular angle. This produces expansive depth in the eye and mind of the viewer, something impressionists and post-impressionists like Vincent van Gogh took note of, embracing Hiroshige’s influence and changing the face of modern painting forever. Meanwhile, every figure in the scene is fleeing from the center – each headed towards the edge of the frame in search of some relief from the storm. The tension is palpable and the scene appears almost ready to burst to life like a high-definition film. 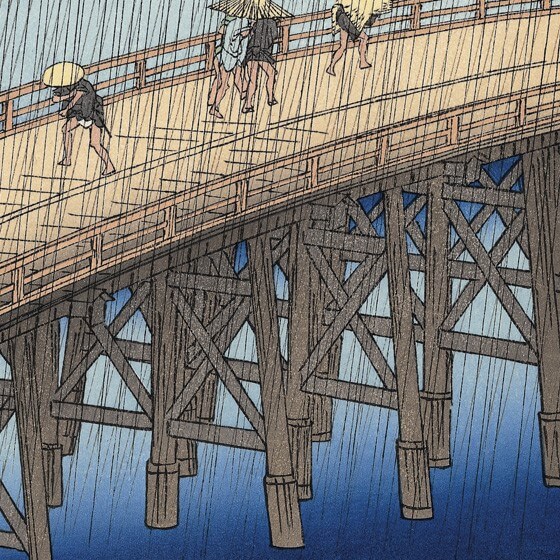 Hiroshige’s Line Work: The Rain Heard Round the World

But most important to the history of not only this painting and its creator but also the world-wide practise and aesthetic of visual art is the masterful line work with which Hiroshige presented these pounding rains. Completely and mercilessly enveloping the landscape – people, structures, coastlines and all – this downpour impresses upon the mind of the viewer alternating senses of excitement, panic, and maybe even a chilly dampness. 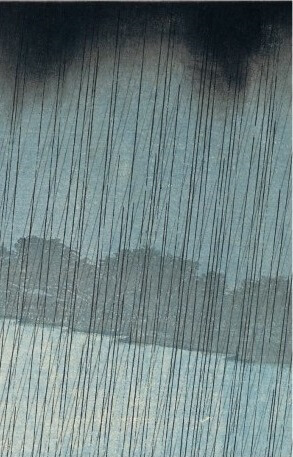 With everything we know about the ukiyo-e woodblock print process (catch up on that method with our in-depth article here: LINK, you might think that Hiroshige painted on the after the print was finished – maybe using a ruler and brush. But no, this rain was completed just like the rest of the painting: using the traditional woodblock method of carving, moistening, and stamping.

Imagine the intricate carves that went into each and every streaming raindrop, each adding up to blur our view of the cityscape behind, an effect that further imbues the scene with a sense of dark, deep dampness. For the most knowledgeable ukiyo-e woodblock print fans – from the art-loving generalist right down the hardcore Hiroshige super-fans – it is impossible to deny the impressive skill of the carver employed under the master artists. The careful etches needed to produce these angled layers of parallel streams is truly unimaginable for all but the most steady handed woodworkers.

In fact, the depth and darkness provided by the thick and blurred background was also created entirely with the woodblock printing method. This means repeated and careful applications of ink and numerous paper-on-wood presses. No easy task for Hiroshige and his small printing team.

Possibly one of Vincent van Gogh’s favourite paintings, the Dutch master even made a copy of it. Vincent van Gogh’s copy of the Hiroshige masterpiece – including own version of Japanese kanji script, written in around the edges – can be seen below. Besides Hiroshige’s innovative and influential use of perspective – a technique itself learned from Western art traditions – the artist’s depiction of the torrential rains pounding down on the river inlet, its residents, and the town behind them is said to have deeply impressed van Gogh as well the wider European audience. 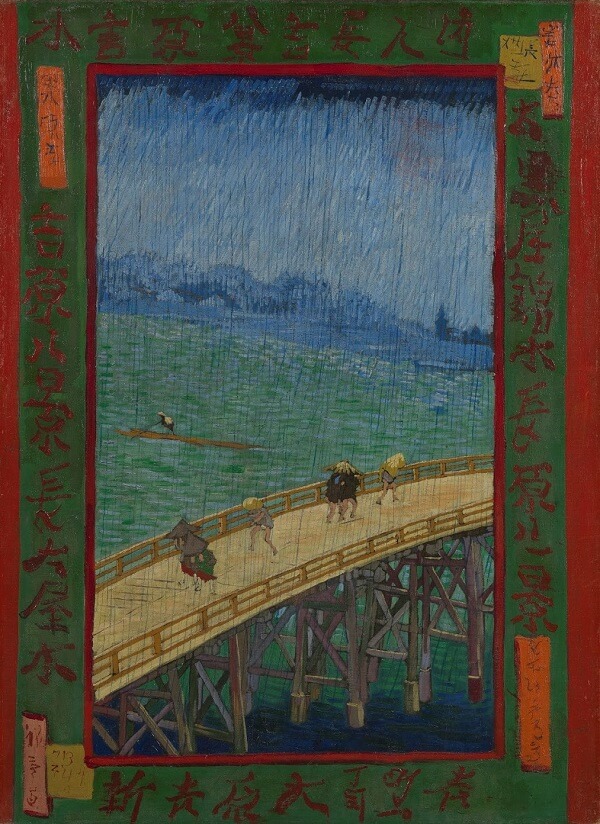 Part of the reason for Van Gogh’s inclusion of a border is because he wanted to reproduce Hiroshige’s original proportions exactly. To make sure that the end of the bridge was not in frame, and that the overall balance and angles of the painting would be the same, van Gogh filled in the unneeded space of his standard-sized canvas with this green and red border. Clearly the Dutch master recognized the importance of Hiroshige’s careful cropping – should the riverbank be visible on either side, the viewers eyes would be taken away from the contrasting activity of the foreground and the dulled, darkened background. This demonstrates the true importance of perspective and field of vision in visual art.

From its stunning composition from a technical point of view all the way down to the classically-Hiroshige use of cropping, perspective, and depth, since its introduction in 1857, “Sudden Shower over Ōhashi Bridge and Atake” has been considered a landmark achievement in the life and career of its creator, as well as in the history of Japanese and indeed all forms of visual art worldwide. The pinnacle of the woodblock tradition, Hiroshige’s rainy Tokyo scene is one that continues to awe viewers in galleries around the world.

What’s more, of all the Hiroshige compositions, “Sudden Shower” is one of the best selling prints today. It can be found on everything from posters, postcards, cups, mugs, and t-shirts. Of course there are even some original prints floating around out there somewhere. For you and me, however, finding a high quality traditionally made ‘new’ print might be the best way to enjoy this Hiroshige at home. These can be found new or used in Japanese shops, as well as online. Happy hunting!

Here’s our product which uses the same technique introduced in this article. Take a look!