In this series, I will cover two of Japan’s most revered master swordmakers: Masamune (Gorou Nyuudo Masamune) and Muramasa (Sengou Muramasa). Though sometimes considered rivals, these two did not live and work together during the same period. Instead, it is their master crafted Japanese katana, as well as the pair’s almost mythological, legendary status as Japan’s greatest swordmakers that has resulted in the popularization of this story of competition. Long outliving their creators, the swords of Masamune and Muramasa have survived for generations in Japan, through periods of prosperity as well as turmoil. While several swords have made it safely into the protective cases of Japan’s top museums, others have disappeared from the public eye, adding fuel to the rumours and legends which surround these master swordmakers and their famous katana. Let’s take a look at these two men, the mysteries of their lives, as well as the stories and myths attributed to their seemingly magical swords.

With so many great tales and unsolved mysteries to share, I will break this piece into two parts. In this first, I will focus mainly on Masamune, Japan’s first and most famous, respected master swordmaker. In the second, we will take a look at the troubled legacy of Muramasa, a comparatively dark and mysterious figure who at once appears as Masamune’s natural successor and troublesome rival.

Before we begin, I must warn you that many of these tales are still without ending. Like a riddle wrapped in a mystery, inside an enigma, the history of Japan’s best katana swordmakers remain some of the nation’s greatest unsolved secrets.  (images: pahoo.org) 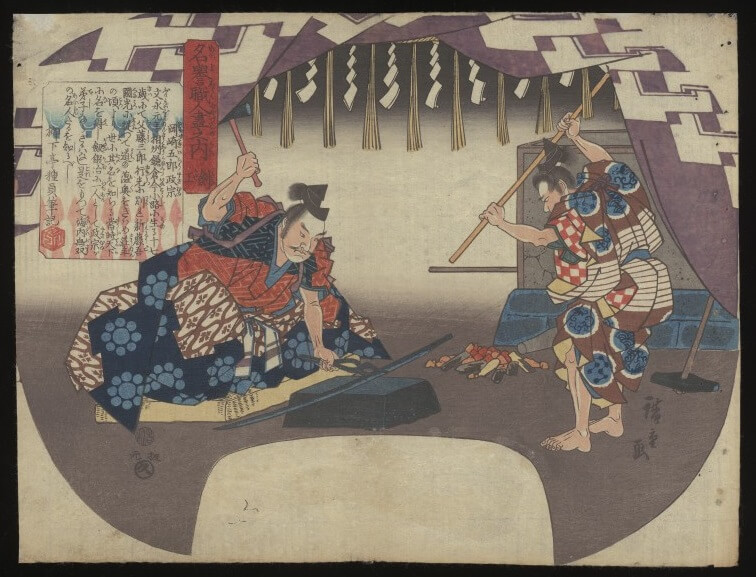 Masamune, a sword master who likely worked during the late-13th and early-14th century, is known for the long katana blades he crafted in his signature style. Like many other aspects of this history we are about to encounter, no one knows the actual dates of his life, death, or even the years he was most active. What’s more, some his most legendary creations have gone missing – an unfortunate loss that stands to only add to the mystery and legend of this master blade smith.

His pioneering method of blending and refining steels, unprecedented at the time, has since become a standard practise amongst top Japanese sword and knifemakers. We see this method in nearly all the high-end kitchen knives covered here at OrientalSouls.

Masamune’s trademark was the edge he applied to his swords. In addition to the strength, hardness, and complimentary durability of his long swords, the beauty of their hamon edge is remembered as particularly impressive. This edge is said to appear like lightening. Meanwhile a fog surrounds these jagged lines like the weather of a tranquil winter’s day. This imagery reflects the balance Masamune struck with his swords: fierce power and a calm, cool collectedness.

One reason for the scarcity of confirmed Masamune blades, is the fact that he was employed by the Kamakura bakufu (fuedal government) to make tachi (long katana) on contract. Having little reason to sign the blades, many potential Masamune swords exist without the name necessary to confirm their true creator. 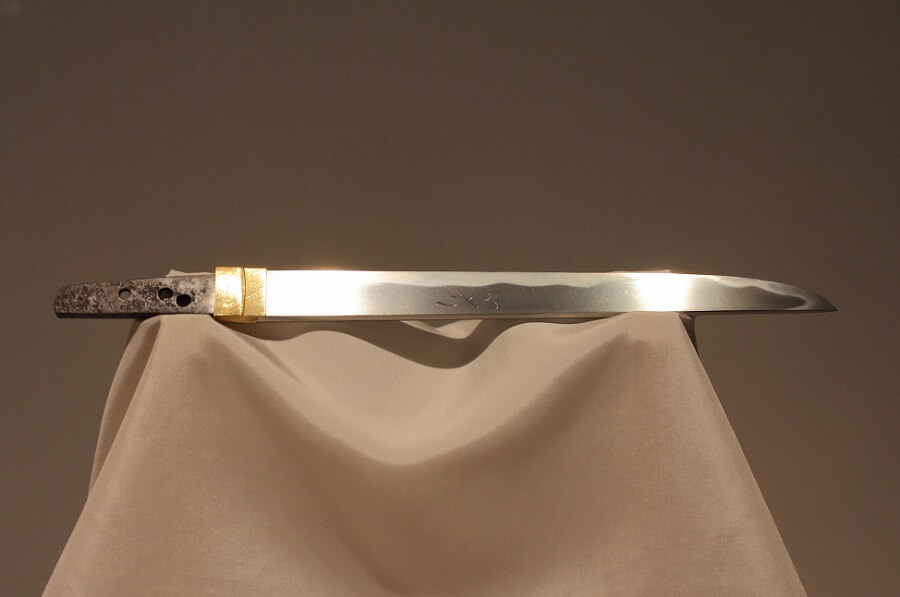 Katana Treasure Hunters: The Unknown History of Masamune and the American Army

Ancient samurai families and contemporary Japanese sword fanatics aren’t the only ones who revere Masamune blades. Interestingly, a Masamune sword was given to Harry S. Truman, President of the United States of America at the time of Japan’s unconditional surrender to the Allied Forces to end the Second World War. It was passed on to him from a General of the allied occupation of Japan, who claims to have received it as a gift from a prominent family somewhere in the devastated country. Perhaps it was a bribe or ‘protection payment’ given to the new, foreign authorities who briefly ruled Japan? Received by Truman in 1946, we might think of the sword as one of the many ‘spoils of war’ pillaged by the victorious allied forces from former enemy territory. The sword is now at the Harry Truman library in Missouri. 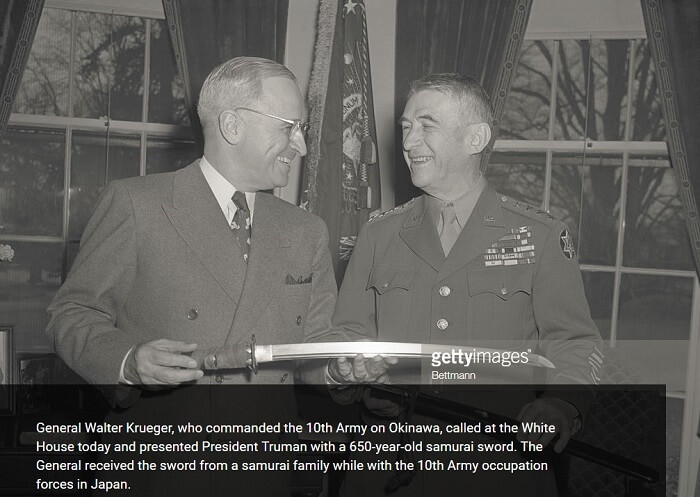 Masamune’s most famous creation was and still is the Honjo Masamune, a katana cherished and passed down through the Tokugawa shogun family for generations. Known for its unparalleled performance in battle, the Honjo Masamune is remembered as possibly the finest Japanese katana ever made. Its hardness and sharpness are said to be unmatched, making it the flagship sword of the legendary Masamune forge. And so it was protected by the most powerful clan of late-feudal Japan, the Tokugawas, under whose ownership it passed when they conquered the Toyotomi shogunate in around 1600. It remained in this family’s possession long after political power had returned to the hands of the emperor with the Meiji Restoration in 1867. They kept it safe as its legend continued to grow, a reputation that peaked with the Honjo Masamune’s naming as an official National Treasure (Kokuhou) in 1939.

It remained safe (and unused, I should add) until 1945, when the American occupation began and the possession of swords was made illegal. Diligently following this new law, the head of the Tokugawa family took his prized Honjo Masamune down to the local police station with all other contraband possessions. The last known record if its whereabouts mentions the arrival at this police station of an American Sergeant, after which the sword was never to be heard of or seen again. Looking up the name of this Sergeant leads to a dead end – a possible typo in the record, or a lying treasure hunter looking to cover up his tracks.

In recent years, rumour has emerged of a Masamune being hidden away in Northern California. Upon hearing this news, many immediately thought of the missing Honjo Masamune. With tensions running high, experts rushed to confirm the identity of these swords. Alas, none of them were the true Honjo sword.

It seems we will never know the true whereabouts of Japan’s most legendary sword. Perhaps it was melted down along the many other, less spectacular blades collected by the American Occupational forces. Alternatively, maybe it was smuggled out of the country, left to remain hidden away in a foreign collection somewhere – not unlike the Masamune blade passed on to the President in 1946! Other, more worrisome tales tell of ignorant American authorities – men unaware of the value and history of Masamune blades and unable to tell them apart from the similarly unmarked weapons they had gathered up – simply dumping historical katana into the Tokyo harbour!

And yet, some cling to their faith that one day the Honjo Masamune will appear. The 2014 news of a rare Masamune blade being brought into a museum by an innocent local unaware that his family heirloom was a national treasure continues to keep the hope alive for many. 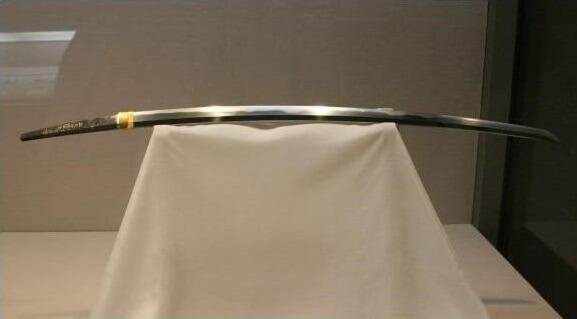 Conclusion: A Legacy that Spans the Globe

From humble beginnings in late 13th century Kamakura, Japan, Masamune’s art and legend has spread throughout the world, enticing the interest of American presidents and amateur history-buffs alike. While his legend continues to grow, many of his master crafted katana remain lost. Will we ever figure out the whereabouts of his masterpiece Honjo katana? All we can do is wait-and-see as expert historians, archeologists, and amateur sleuths continue their hunt.

As for the Masamune family today: his great(x21)-grandson, a 24th generation Masamune bladesmith, operates a forge in Kamakura, the hometown of the first Masamune master. 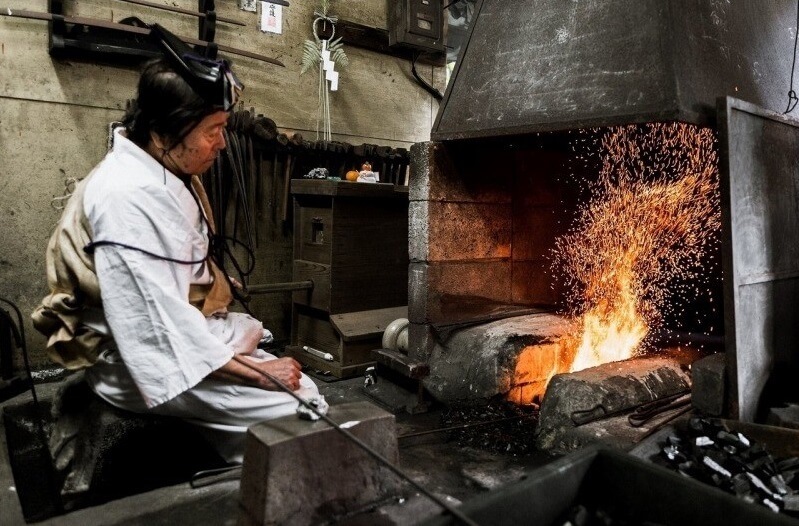 Stay tuned for part 2 (link) of this article where we will take a look at the sometimes demonic myth of Masamune’s historical rival swordmaker, Muramasa. An even creepier tale of possessed and cursed blades, we will dive again into a sea of mystery, the likes of which continues to confuse historians and experts around the world.