As you probably know, there’s a general set of rules in making a ‘bento (Japanese lunch box)’. Among the rules that top the list is to make sure every meat and fish related cuisines have been cooked thoroughly to eradicate any chance of food poisoning. Many home chefs drop their shoulders to this unexciting rule when they are first introduced to bento making, because one of their all-time dream has been shattered — to compose a sushi bento.

You might not be able to fancy up your bento with raw tuna and squid, but those aren’t the only choice you’ve left. Below is a type of sushi bento that you can make without worrying about food poisoning
(※the ingredients mentioned below are ones that are only less likely to go bad, so please avoid making sushi during the summer since any ingredient can get spoilt under the heat, or bring an extra ice pack with you) 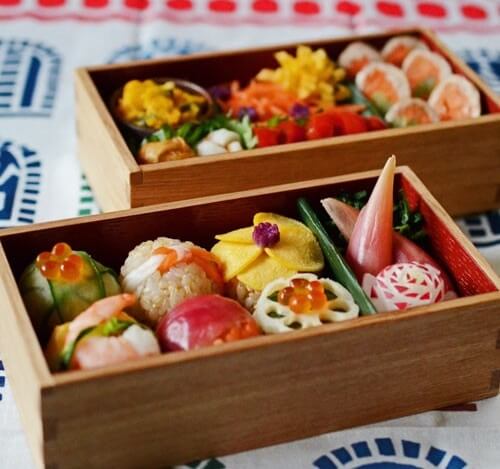 Temari Sushi is a non-traditional sushi that was introduced fairly recently. It was named after a decorated ball in old time Japan called ‘temari’, that was simply played with by bouncing it on the ground using hands. How and when it was originally created is unknown, but it has been a popular choice among home chefs as an easy way to make decorative sushi.

The recipe is simple. You put a bite-size sushi rice and toppings of your liking on a plastic wrap and shape it into a small ball. Since it doesn’t require special skills, people often play around with different flavor palettes and add on to the visual complexity of it by using multiple ingredients.

You can of course choose to be completely traditional with the toppings if you’re making them at home, but since you’re composing a bento out of them, let’s look at both traditional and non-traditional ingredients that are bento-able. 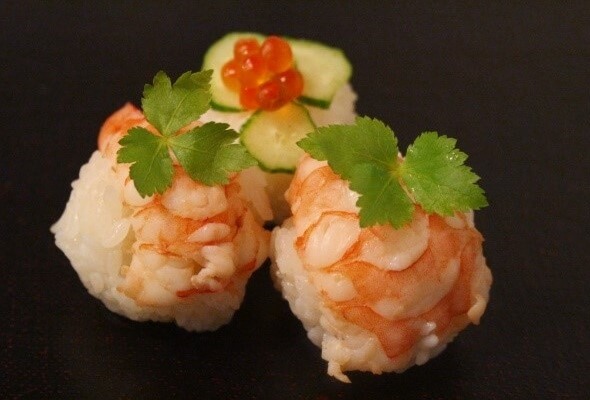 Sample recipe – cut off the head and the tail from a raw shrimp, put a skewer straight through the shrimp and boil it, take the shell off and cut it open, take out any black parts, leave it in a mixture of vinegar, water, and sugar <2:1:1.5> for one minute. Wrap it into a shape of a ball, and top it with an edible mitsuba or leaf of alike. You can also decorate it with a small amount of marinated salmon roe. 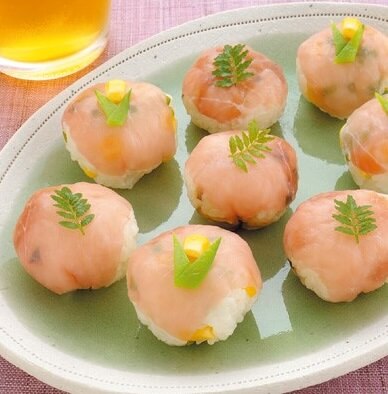 Sample recipe – chop onions and leave it in water, get rid of the water and mix the onions with sushi rice, wrap the rice and cream cheese with prosciutto, top it with black pepper and a little bit of olive oil. 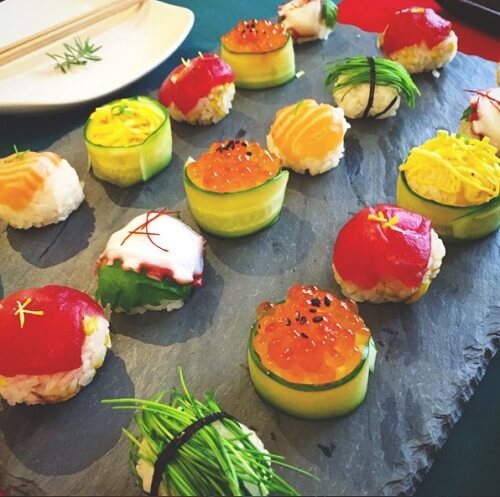 Sample recipe – Prepare a thin layer of cucumber or thin sheet of fried egg seasoned with salt and sugar, wrap a ball of sushi rice with it as shown in the picture, and top it with salmon roe. Make sure the sheet that wraps around the rice ball has a certain height so that the eggs want pour out. 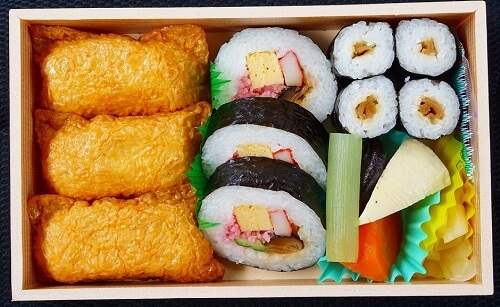 Sukeroku Sushi is a type of bento that became popular in the mid Edo era, when a law regulating expenditures was passed in Japan. During this time, people were prohibited from making and eating of sushi made from raw fish, so instead they spent their money on sushi called ‘age’ and ‘maki’. Soon these sushi came to be sold as one package called ‘agemaki’. One theory says that transition of the name to ‘Sukeroku Sushi’ happened when a Kabuki play called “Sukeroku Yukari no Edo-zakura” became popular, in which Agemaki, a lover of the main character Sukeroku appears.

Sukeroku Sushi mainly composes of ‘age’, or ‘inari sushi’, and ‘maki’. Inari sushi a type of sushi that wraps sweetened deep fried tofu around a seasoned sushi mixed with chopped vegetables, while maki refers to a sushi that wraps variety of ingredients, or sometimes a single ingredient, with sushi rice and a dried sea laver.

Below are links to traditional recipes that I found that was written in English: 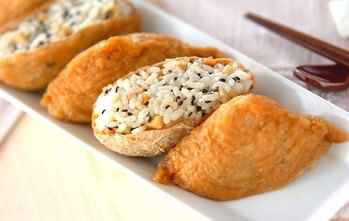 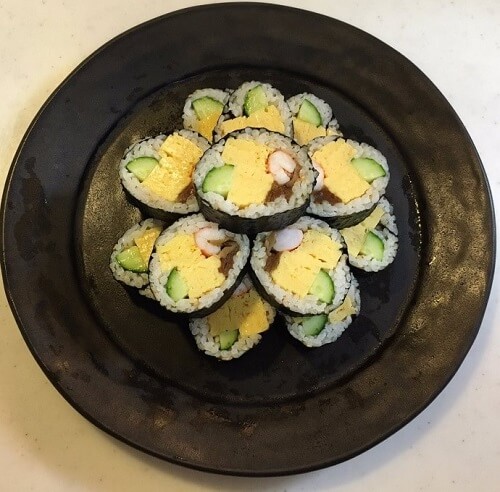 Recipe… See this page
(You can change the prawns to something else if you want to, as long as it’s boiled for safety! Somewhat untraditional but som people favor deep fried shrimp rolls; maki sushi with mayo, prawns, and avocado; or lettuce and tuna mayonnaise rolls)

Aside from these two types of sushi bento, you can also make your bento look like it’s composed of sushi, simply by putting the side dishes on top of an oval shaped rice. 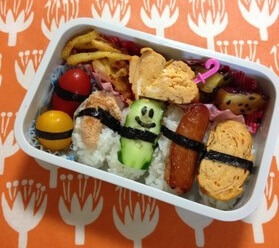 Maybe this isn’t the most authentic experience but not everything has to be traditional when it comes to bento. The most important thing is that you or someone you’re making it for can enjoy the bento spirit! So please add your favorite ingredients :))