Origin of Japanese calligraphy, which is also called Shodo, began when Kanji characters were passed along from China continent. There was no written character existed in Japan until then. After a while, Shodo writing in Japan had started to develop quickly once Buddhism was propagated to Japan. Shodo has developed gradually since then, and the first “Three Brushes” were appeared at around that time.

The First “Three Brushes” Greatest Calligraphers – Kukai, Emperor Saga and Tachibana
Another Famous Three Brushes Were Appeared in Early 17th Centuries
In Conclusion: And The Others

A reason why Japanese calligraphy rapidly developed once Buddhism was propagated is that the government of the era decided to copy all the sutra and distributed in paper books. When writing became popular, some people became famous as great calligraphers. They are the first Three Brushes. Their names were Kukai, Emperor Saga and Hayanari Tachibana. They were not only copied sutra but also tried to develop original writings to make Japanese style calligraphy. Especially Kuai is considered as a leader of the three, and he made huge impact on his future generations. 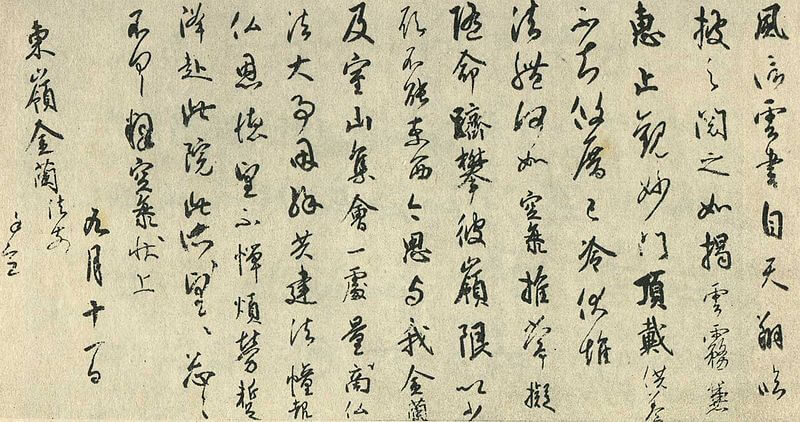 This is a calligraphy written by Kukai. It is designated as a Japan’s national treasure. He has a nickname of Koubou Daishi, which name is awarded from the Emperor Daigo. His nickname, Koubou Daishi, is so famous that most of Japanese have heard the name even today!

Another Famous Three Brushes Were Appeared in Early 17th Centuries

It is the fact that the most famous and greatest Three Brushes are the ones introduced above i.e. the first Three Brushes in the history. If we list up next famous Three Brushes, then ones in Kanei era should be it.
In this era, a lot of civil wars were broken out. Dignity of the emperor of the era was deteriorated, and he finally ran away from the capital. To preserve his living rights in such a harsh era, the emperor and his clan persisted to their traditions and made a living by teaching them. Shodo calligraphy writing was one of their assets to teach to the others and earn money. For this reason, more than 50 Shodo schools had jumbled. However, most of them were similar and not distinguishable. In such a disordered era of Shodo, some calligrapher had developed evolutional styles and gained fame as the Three Brushed of Kanei era.

Each of them established their own Shodo schools, respectively, and all of them gained much popularity in the era. The work of calligraphy art shown above is made by one of the Three Brushes, Koetsu Hon-ami. Unfortuantely, no successor with enough technique had appeared, so their evolutional style was all gone by the end of their lives.

In Conclusion: And The Others