One aspect of Japanese culture you might be familiar with without even really knowing it is the ancient tradition of incense. If you caught a whiff, the memories might come flooding back. I know that’s what happens to me when I walk past a temple or even the open window of a ground floor apartment where the resident is enjoying afternoon incense.

Like much of Japan’s traditional, artistic culture, the burning and appreciation of incense is closely linked with a respect for nature. With a history dating back as far as the introduction of Buddhism to the islands of Japan in the 6th century, the burning of incense has continued here uninterrupted ever since. Today they are used in many aspects of life, not only in Buddhist ceremonies. Moreover, they have spread throughout the world since the ‘50s and ‘60s, meaning that you have probably at least once smelled the classic aroma of traditional incense. 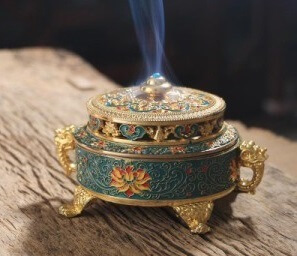 Incense and Art: Historic Connections
A Blend of Creativity, Tradition, and Practicality: Iroekiji-kōro
One of Ishikawa Prefectures many Artistic Treasures

With this long history nature-inspire aromas and ingredients, it may come as no surprise that the ornamentation used in incense burning has its own creative flair and beauty. As sturdy, reasonable ‘tray’s or holders for incense, pottery has been widely used since the middle-ages. As an expression of that appreciation for beauty, tranquillity, and perhaps even one’s own wealth or good fortunes, incense holders became more intricately and impressively decorated through the 15th, 16th, and 17th centuries. Thus, while Japan’s potters began perfecting their craft, there appeared more and more elaborate and ornately beautiful pots in the courts and temples throughout the islands. 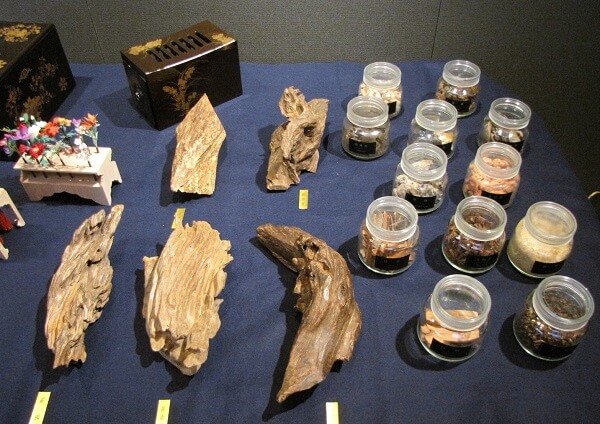 And so the Japanese tradition of pottery flourished – unique artists built kilns in cities across central and western Japan producing brilliant works of art for clientele in the imperial capital of Kyoto. One such artist was Nomura Ninsei whose colourful painted and glazed pottery impressed many of the capital’s elite. Today, some his works survive in national museums and galleries, including a few special pieces combining the traditions of pottery with incense and even tea ceremony wares.

Perhaps his most famous work – one designated as an official National Treasure in 1951 – is the Iroekiji-kōro or ‘painted pheasant incense holder.’ 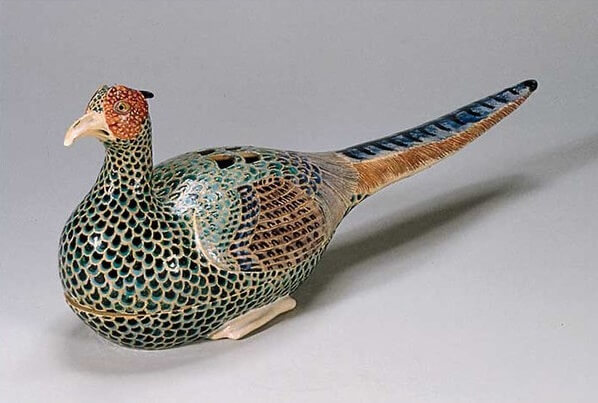 A Blend of Creativity, Tradition, and Practicality: Iroekiji-kōro

The Iroekiji-kōro actually demonstrates several aspects of Nomura Ninsei’s distinct and groundbreaking style. The first is his skill as a potter: the piece is near life-size and contains a number of realistic characteristics visible when one compares it with the sorts of living Japanese pheasants after which he modelled his work. Next is its colourful decoration, achieved with careful carvings on the bird’s surface with greens, deep blues, and gold leaf colouring.

It is said that at the time, the moulding and firing of a sculpture with suspended appendages (like the tail, seen here) would have been extremely difficult. This is one of its most celebrated features. 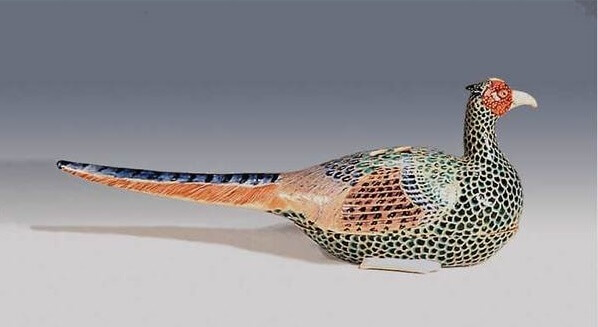 Upon the bird’s back are four holes which allow the smell of the incense within to waft out, providing the room with wonderful, carefully selected aromas. Though it is no longer used to burn incense today, the piece is on constant display as a part of the prefectural museum’s permanent exhibit.

Known to have kick-started the Kyoto-school of pottery and porcelains with his perfected and unique style, Nomura Ninsei is remembered today in Japan as one of the great masters of this art form.

One of Ishikawa Prefectures many Artistic Treasures

Nomura Ninsei’s Iroekiji-kōro is just one of the many cultural and artistic treasures housed in or originating from today’s Ishikawa Prefecture on the Sea of Japan coast in central Japan. Today, viewers can take in its beautiful hues and majestic lines at the Ishikawa Prefectural Museum of Art.

Indeed the Prefecture can boast more than just this one piece. Ishikawa is the home of the world famous Kutani pottery, the Shiroraku-chawan tea cup, important sumi-e Indian ink paintings like Kusumi Morikage’s Farming in the Four Seasons, as well as several schools of lacquerware making with histories going back into the middle ages including the legendary (and incredibly expensive) wajima-nuri.

To this list of important cultural treasures, Ishikawa can add an array of linen and embroideries traditions, including the Kaga embroidery and ushikubi fabrics beloved by kimono wearers throughout the country.

Finally, to this list I will add the world-famous onsen hot springs of the region. Not to be forgotten! So, on your way to or from Ishikawa Prefectural Museum of Art in Kanazawa city, why not stop in Kaga for a soak in one of the many natural, outdoor hot springs and really enjoy nature first hand?