Today’s Amateur Vs Expert review has us looking at the most famous Japanese tea cup there is: the Rakuyaki-Shirokatami-Gawaricha-wan – or Shiroraku-cha-wan for short. Now for those of us who have never been to Japan, I will start by saying that cha-wan teacups are the most important item in the Japanese household. Since antiquity these have been the meal and break-time companion of everyone from humble farmers to Emperors and their courtesans. Without the teacup, meals simply wouldn’t happen in Japan. Used for either drinking or eating, every household needs a set – many invest in high end pieces for use serving guests. Imagine your mother’s finest set of crystal or china – you know, the one you only saw once or twice a year and were never, ever allowed to stack, microwave, or put in the dishwasher. In Japan, the cha-wan tea cup is the equivalent. What we have today is perhaps the king cha-wan. 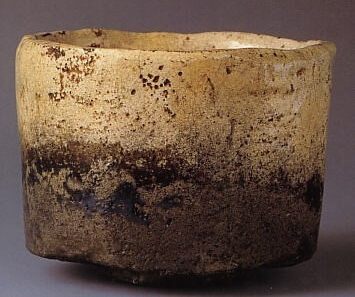 Like our previous Amateur Vs Expert reviews, I will begin with a history lesson before launching into my blind review of the National Treasure (Kokuhō) Shiroraku-cha-wan itself. So that I don’t entirely miss the mark and anger a whole army of pottery fans and aficionados, I will end the piece with a summary of the views and assessments of its beauty by the true experts – stick around for that. Plus, for even more info on these ancient pieces of tableware, check out our coverage of the truly ancient and completely mysterious Yohen Tenmoku bowls. (LINK)

History and Usages: The Japanese Tea Cup and its King, the Shiroraku-cha-wan
Amateur Hour: Jay’s Take
The Expert’s Take:
Wrap-up

History and Usages: The Japanese Tea Cup and its King, the Shiroraku-cha-wan

Because of their importance in daily life, Japanese potters have focused primarily on the cha-wan tea cup since the early-middle ages. For the pottery-merchant, the cha-wan is their bread-and-butter, sure-fire seller. Today, cha-wan cups from the master potters from the Edo period (1603-1867) are protected items of special cultural and historical importance. 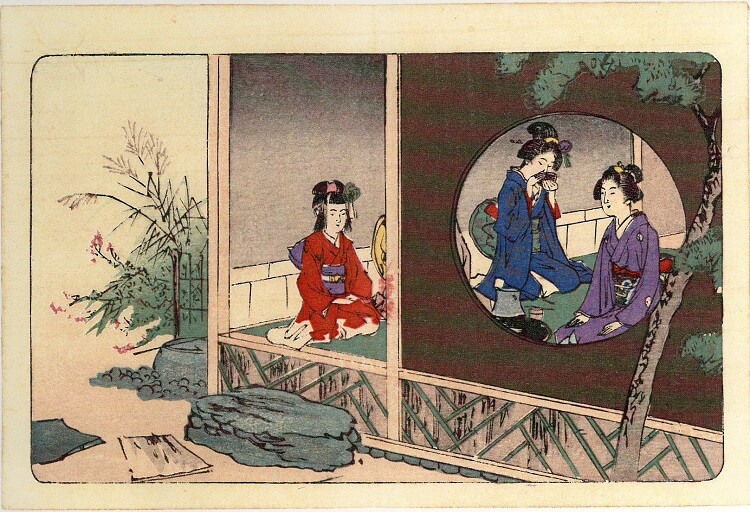 A certified National Treasure, the Shiroraku-cha-wan was crafted by Hon’ami Kouetsu (1558-1637) as a gift for his daughter’s groom and family in Osaka. It is made in the oldest, traditional method of hand-moulded earthenware, low-temperature pottery styles. Comprised of rough sand mixed with white clay, the cup has a rugged style. 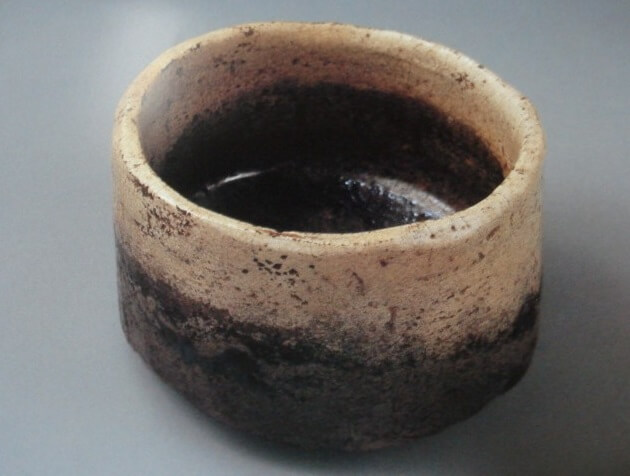 First I will begin by saying that I use cha-wan everyday for both meals and tea. Moreover, I have attended several tea ceremonies and used rather expensive, ‘ceremonial’ cha-wan tea cups for that. What is see in the Shiroraku-cha-wan is a cup made for drinking, not for rice. Its moulding and shape reflects a sort of natural ruggedness; it doesn’t reflect the perfectly rounded edges and uniform lines of some of the other pottery wares being produced in Japan at this time in the famous workshops of Nagasaki and Ishikawa. No, the Shiroraku-cha-wan has a sort of flawed, natural beauty that probably reflects an appreciation for the imperfections in nature – we’ve seen this aesthetic in the scenery paintings of the sumi-e ink wash masters, as well as in the ukiyo-e woodblock prints from the 17th, 18th, and even 19th centuries.

My reading of this tea cup is informed by those aesthetics. The best of Japan’s artists were gathered in Kyoto during the time Kouetsu was working there in early 1600s. They would have been next-door, working on their paintings or sculptures, sharing the view of the rivers and mountains and probably coming in contact with one another quite often. What’s more, as a high-profile artist, he himself probably travelled to Edo (now Tokyo) along the Tokaido and through the many sights of Japan’s mountain valleys and coastal areas between Kyoto and Edo. So perhaps the rugged beauty of nature was in his mind when he made this cup. I think I’m really starting to see parallels here – or maybe I’ve just had too much coffee. We’ll have to see what the experts say. 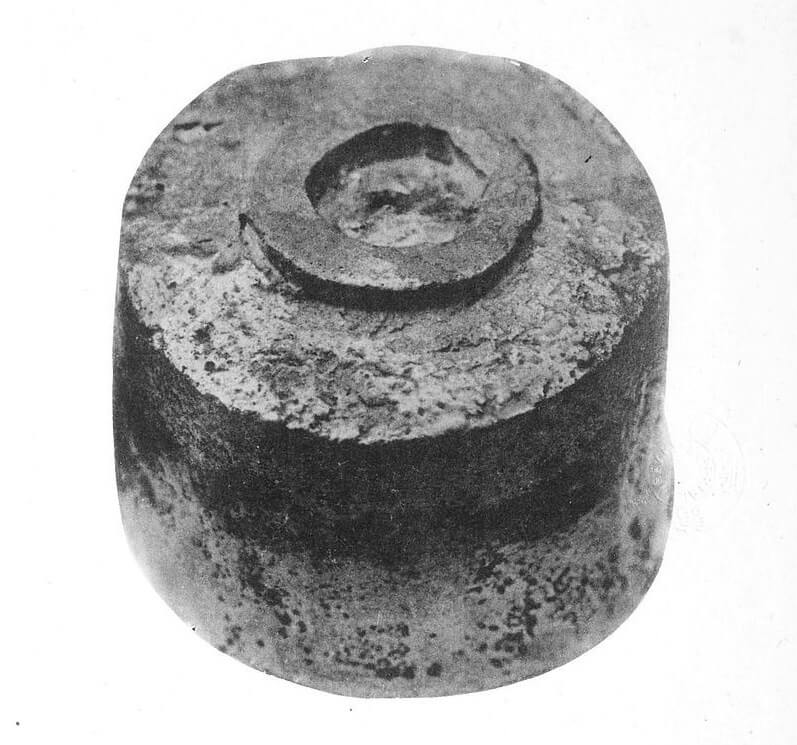 Finally, I will note that the base has a nice stand, and that I can imagine taking a firm grip of the cup while turning it in the midst of a tea ceremony. The determined-yet-graceful movements of the ceremony require you take careful hold of your cup, and this sturdy design would probably suit that process well. 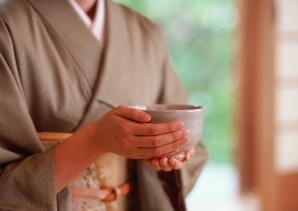 To me, the strength and weight its appearance shows is its main and best feature. I like a deep, dark coloured piece of heavy pottery – one with a rugged look that sits firmly in my hand. And yet, my eyes are now drawn to its sharp, steep sides. These are flatter and more uniform in shape than any other part of its design. Perhaps this contrast is what gives it such an impressive appearance: one of power and grace.

As a certified National Treasure and the centerpiece of the Sunritz Hattori Museum of Arts in Nagano, the Shiroraku-cha-wan has been studied and written about by a number of the world’s leading pottery experts. Let’s see what they have taught us about its unique history and beauty.

Its design is said to have been inspired by a view of snow-capped Mt. Fuji. For this reason, the Shiroraku-cha-wan was first given the name Fuji-san by Kouetsu in as a creative homage to that impressive mountain. Some experts argue that by naming the piece after Mt. Fuji, a mountain of unparalleled size and beauty, Kouetsu was proclaiming his tea cup as the greatest in all of Japan. Either way, you need quite a bit of confidence to adopt this name – he was certainly aware what he had created. Still, historians remind us of Kouetsu’s true profession: sword making. That’s right, the creator of Japan’s most famous cha-wan tea cup – an official National Treasure – was in fact a bladesmith by trade. 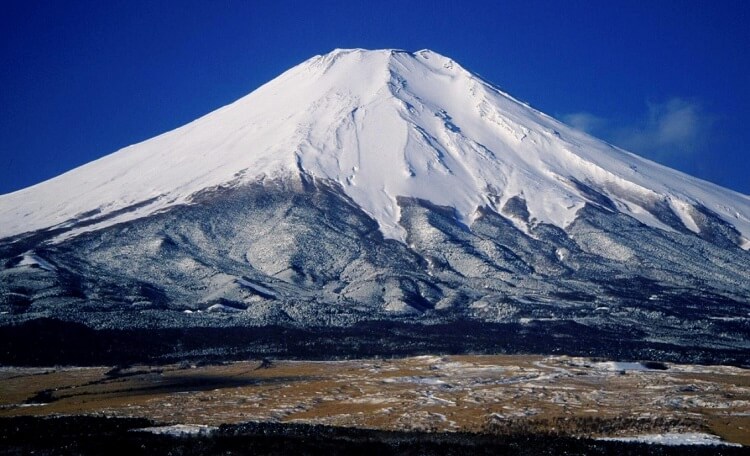 While the Shiroraku-cha-wan took its first name from the mountain it so closely resembled, the truth about its two toned designed remains a pottery-mystery – though perhaps we would call it a miracle. It seems very likely that the dusting of white ‘snow’ across the top wasn’t planned at all! According to historians, a single layer of glaze was applied to the entire piece before it was thrust into the kiln. Somehow, the heat of the top-half, inside, and outside lower-half was different, and the result was the white colour draped across the inside and top edges of the cup. Like the ever famous snows which dust Mount Fuji and its crater, the cup emerged from the kiln with its beautiful, two-tone dress. Contrast, then, becomes the main theme and focus of this piece: first, contrast of colours, and second, contrast in shape.

I certainly noticed the contrast in shape. Some experts have mused that the sense of uneasy balance so commonly referred to in describing hand-moulded earthenware (ie: ‘rugged’) pottery from this period is a perspective introduced by Kouetsu and his Shiroraku-cha-wan. If  this is true, his style can be said to have set the most important precedent around for those of us who study, write about, and make sense of the beauty of Japanese pottery.

Well, there you have it. Another edition of our Amateur Vs Expert review series. Stick with us as we continue to run down the list of the greatest and most valuable of Japanese arts and crafts. There are still a bunch more National Treasures left, and I’m going to keep trying my hand at these blind reviews. See you next time.