Did you know that one of Japan’s most famous sets of ancient samurai armour is in fact armour-less? What’s more, the set has been linked to the oldest known usage of the mark of the ‘Rising Sun’ – Japan’s national symbol, famously used today on its flag. Today we’ll take a look at this unique and famed set of armour, meanwhile investigating its links with the founding of Japan’s national identity.

Tatenashi Yoroi: A National Treasure and Relic of Middle Ages’ Japanese Art and War
The Tatenashi-yoroi Armour and the Mark of the ‘Rising Sun:’ The Birth of Japan’s National Symbol?
The Tatenashi Armour in the Edo and Modern Periods

Amongst the ô-yoroi, or ‘Great Armour’ class of ancient Japanese armour, there are a handful of distinct and especially unique sets still around today. Dating back from the early Middle Ages, these sets are large, heavy, and boxy – they include a helmet and even long sleeves. They are important examples of the most advanced technology of the Heian period (794-1185 AD); technology which offered warriors the ultimate level of protection. Unsuitable for warriors looking to retain their nimble agility, these sets were saved for the most important, senior ranking warriors. Today they are the oldest and rarest pieces in existence in Japan, a trait which adds to the already impressive history as well as lengthy list of myths and fables attached to their name. One of the most unique of these sets is Tatenashi yoroi armour set of in Yamanashi, Japan. 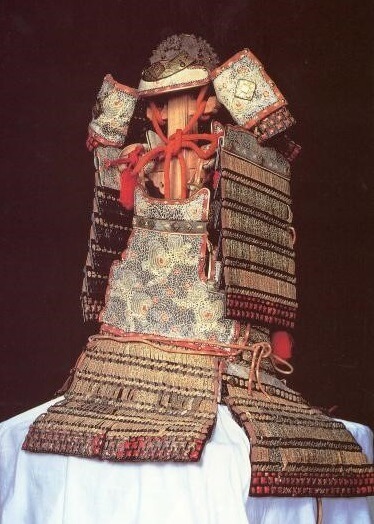 Protected deep within the Kanda Shrine, the Tatenashi yoroi armour set is distinct for its lack of armour plating. So blessed is this set that it is said to guard from both arrow and sword without the need for the usual layers of plates characteristic of the ô-yoroi ‘Great Armour’ of this type. Thus it’s name: tate (plate) nashi (without) – or ‘armour without plates.’ Certified as a National Treasure (Kokuhō) in 1952, the set has been shown only on rare occasions ever since. 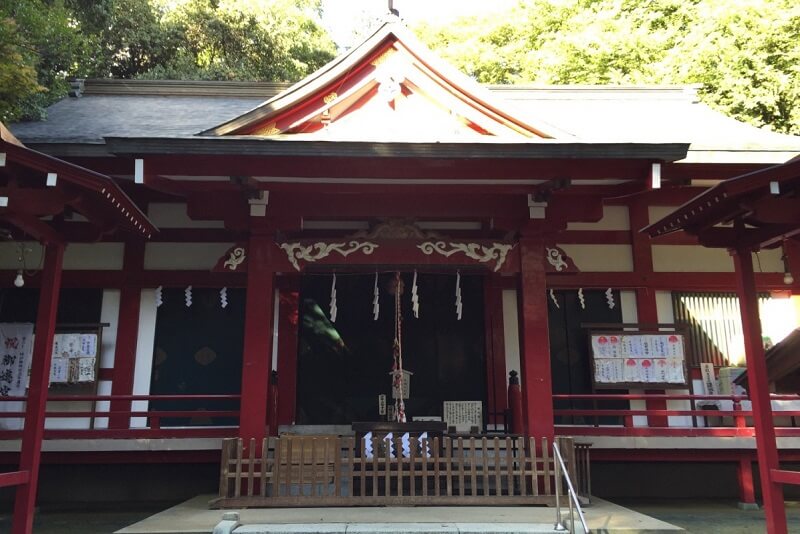 So why the unforgettable reputation? Perhaps its reduced weight – a rare trait in the age of heavy, boxy armour (sometimes registered at over 35-kilograms!) – provided advantages in battle during those early years. Perhaps it’s lovely saukura flower decorations won the hearts and minds of the villages it protected. What is certain, is that as an important heirloom of the most powerful local family, it’s fame and value skyrocketed even as its tech was surpassed by newer, lighter, and stronger samurai gear. The Tatenashi amour remained a respected set long after it was made obsolete on the battle-field.

Its creation dates back to at least the period of the Heiji rebellion in 1160 AD. Used during that conflict, it was rediscovered on the abandoned battlefield a few years, bringing it back into the possession of the area’s most elite samurai families where it has been passed on by local leaders and overthrown feudal lords ever since. For historians and samurai fans, the Tatenashi set is a useful marker of power and wealth in the Yamanashi region since the middle-ages – those who owned it were the elites of their respective era. Add to this our records of subsequent warriors praying to it for protection before departing for battles, and its legacy as a mythical set capable of defending through other means grows and grows. By tracing its guardians we can follow almost all the big names and events through almost a thousand years of Japanese samurai and warlord history.

The Tatenashi-yoroi Armour and the Mark of the ‘Rising Sun:’ The Birth of Japan’s National Symbol?

But it’s not just the unique features of the Tatenashi armour set that make it so special. No, we also have to include its legendary pedigree, as well as the personal histories of those who owned it. With links to Takeda Nobuyoshi (1128-1186), the founder of the legendary Takeda family of Yamanashi, we know that the armour was used under the hinomaru rising sun banner in the oldest confirmed flying of this symbol. Now the mark of the modern nation of Japan, this banner and family is respected as important heroes of Japanese history – right up there with Oda Nobunaga, Tokugawa Ieyasu and co.! 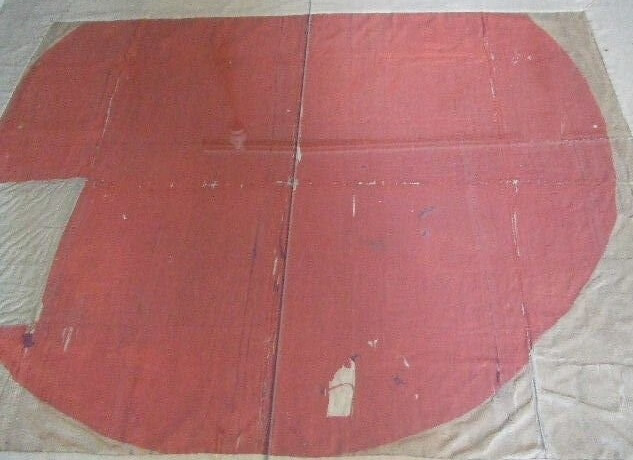 As you might have guessed, the hinomaru banner – the mark of Japan – has links with the Imperial family. This oldest banner was itself handed down by Imperial royalty to Shinra Saburō, who carried it before passing it down to what would become to the Takeda family. Thereafter it passed through even the hands of that family’s most famous member: Takeda Shingen (1521-1573). These figures are well known throughout Japan for their important role in the warring periods of the nation’s history. People in Japan are taught about the triumphs and defeats of these heroes all throughout school, so when it its revealed that they were the protectors of such pieces as the Tatenashi armour and the country’s oldest hinomaru Rising Sun banner, the value of these treasures does not go unnoticed.

Add to this the fact that Shinra Saburō has been linked to Genji of the ever-famous The Tale of Genji, and you’ve got the perfect recipe for a hero of Japanese history. 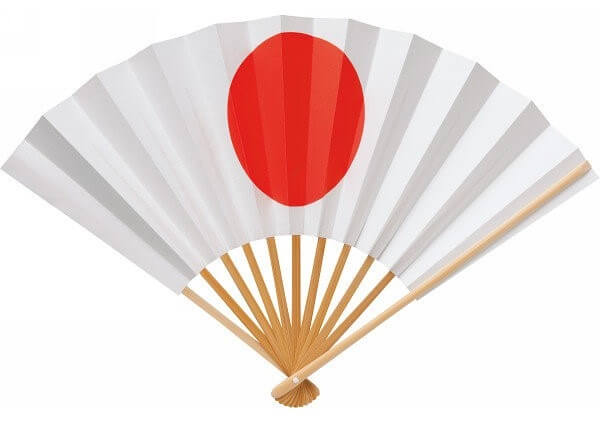 The Tatenashi Armour in the Edo and Modern Periods

Evidence of mends and repairs made to the Tatenashi yoroi armour dating from the 18th and 19th centuries speak to its history and value. It is believed that a certain amount of damage was inflicted during a burglary and subsequent hasty getaway – evidence of the value and desirability of this historic set. Much of our knowledge about Heian period ‘Great Armour’ is said to have come from investigations of its nicks and tears.

While the original remains locked away in safe protection at Kanda Shrine in Yamanashi, an amazing replica is on display at Yamanashi Prefectural Museum. While it is said that on very special occasions the shrine will open its innermost sanctums to visitors, allowing viewings of the Tatenashi armour, from all the accounts I’ve read you need to have an ‘in’ with the priests there. For those of us who don’t know the guardians of this National Treasure well enough to ask them this favour, the replica will have to do!

Luckily, Yamanashi Pectoral Museum the replica provides us an opportunity to appreciate the beautiful colours of the set, as well as a chance to take note of the weaves and shapes that characterize this ancient ‘genre’ of  ô-yoroi ‘Great Armour.’ A snapshot of what it would have looked like 800+ years ago, the replica is a fun way to make your own observations about ancient Japanese armour crafting and traditional art. 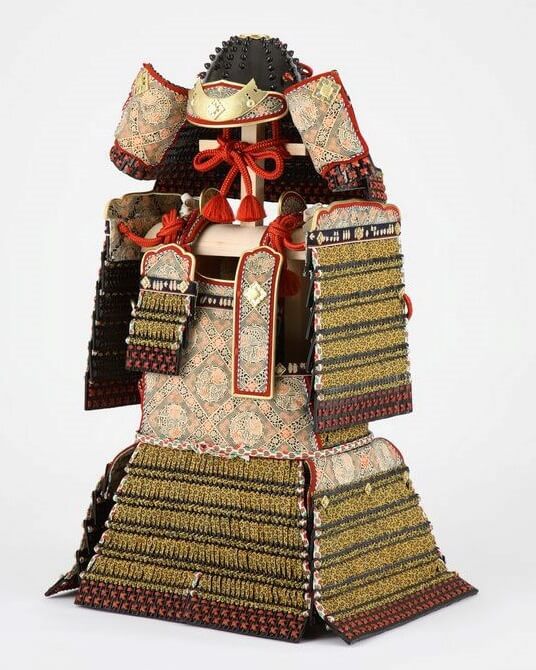